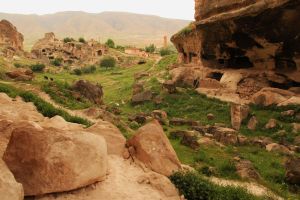 Either ancient cave houses don’t fascinate Turkish tourists as much as they do me, or they were seriously lacking in endurance, because I quickly left all the other visitors behind as I walked up into the canyon.

That was fine with me though, as I enjoyed some of the first deep silence I’d heard since…Iceland?

I was walking up a narrow slot canyon under overcast skies on a day that I’d already witnessed heavy rainfall. Not particularly smart, but oh-so-beautiful. Striated stone made me want to study geology, bright blossoms urged botany, and the final vista was a strong argument for theology. 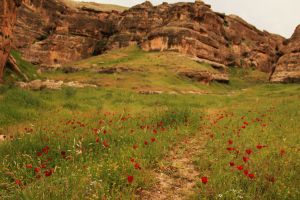 Sheer mountainsides warrant a soundtrack. Trevor Jones and Hans Zimmer are gods among men, and soon my steps fell in the universe’s own rhythm, my breath understood the seasons, and my blood made love with the stars.

Travelgasmic, if you don’t mind the term.

Like my grandpappy taught me, I hoped to make a loop of it, but at the top I reached the Edge of the World, a sheer cliff that fell to a winding strip of empty pavement far below. I billy-goated around until I realized just how steep the surface was and how far the drop. At the top were two man-made caves, one for the sheep and one for the shepherds, though I choose to believe the latter is for spiritual quests. Cuz I’m hippie like that.

I would have happily sat there to watch the stars in their courses, but I was out of water, so I started back.

Turkey, as seemingly every developing nation (though Turkey is borderline in that regard), is covered in garbage. Bags, plastic bottles, and cigarette butts seem to blanket the nation. I know I can’t clean up the whole thing, but to me, a place that beautiful is church. Would you pass by garbage in your church/mosque/synagogue/temple/circle of standing stones?

On the way up I gathered a bag full of plastic bottles. On the way down I added a second. Then a third. I had just filled the fourth when I ran into a half dozen Kurdish youth, visiting from various cities. I have yet to meet a Kurd who is less than friendly, but these folks took it to new heights. I enjoyed talking to them, but assumed they were headed up, while I was headed down, and we said goodbye.

Twenty seconds later, through the sounds of Maximus’s Strength and Honor, I heard “Hey! Guy! Hey…guy!”

They caught up to me. “We want to share social media with you. Do you have facebook?” So on a gorgeous day in Kurdish May I was using my grubby fingers to type my name into someone’s phone. 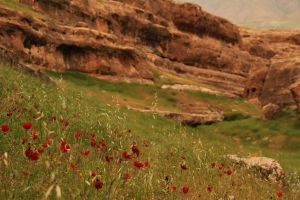 They took some pictures of me, which was kind of awkward but adorable, and we started down together. A minute later I looked ahead to see one of the guys had picked up a bag and filled it with garbage. Love.

A minute after that I looked again to see everyone was doing it! I have no made up word to describe it, but my heart beat faster. I felt like I had found my tribe. I wanted to hug each and every one of them and invite them to my birthday party.

We descended the valley, passing other young’uns, each invariably perplexed as we tromped by in high spirits and up to our armpits in trash. We can’t clean the whole country, but I have to say, we did a pretty good job on that holy canyon.

And they all lived happily after.
Except I promised you a tragedy.

As we walked, one of the guys, the best English speaker of the group and a lad whose enthusiasm and likability shine through his eyes, fell in to talk to me.

My brain tried not to understand.

“In one year, maybe two, this is all water.”

Akkadian, Roman, Byzantine, Arab, Artuqid, and Ottoman. That’s just the last 4,000 years of the 10,000 that Hasankeyf has existed. It has one or two left before the Ilisu Dam wipes it off the map.

The Turkish government claims the dam will help develop the region, but many point to the decades-old conflict with Kurdish nationalists, and say that the destruction of the town is part of a campaign to destroy Kurdish culture.

You can sign a UNESCO Petition to Save World Heritage on the Tigris River in Mesopotamia if you are so inclined. Maybe even tell your friends?

But either way, go to Hasankeyf. Soon.

← So nasty. So beautiful. Hasankeyf Part 1
Miracles, misery, and memory on my last night in Turkije. →

21 thoughts on “Two travelgasms and a tragedy. Hasankeyf Part 2.”