I’m supposed to be writing a blog right now. Instead, I’m pretending to type while observing the hunched man across the communal table, who looks like Lewis Black fallen on hard times. His hair is greasy and thinning, spots on his amorphous button-up shirt, and a stained paper coffeecup close at hand, even though we’re sitting in the coffeeshop.

He looks like a scientist who’s spent too much time in the lab. He looks like the parents’ least favorite bus driver. He looks like a calm madman, glaring at his crotch as if it holds the answer, and occasionally starting sentences like “I don’t know why…” and “It would work if…” but never finishing them, just exploding in sighs and more staring. 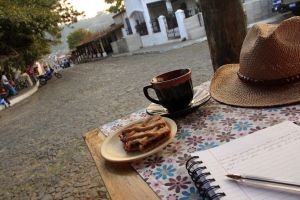 Coffee, postre, and a journal in El Salvador

Now from his lap he takes a clump of papers, green ink notes and revisions. He’s a writer. Of course he’s a writer. Crapola. It feels like A Christmas Carol, and he’s the Ghost of Careers future. Why would I want to do that? A writer friend’s words come stabbing up from where they lodged in my ear: “You’re young enough, have you considered getting out of this bullshit profession before it’s too late?” Yes I have. Regularly.

Today is just one of those days. When everything is…just not…doable. I picked up the weights for my wee morning exercise, and…put them down again. Once doesn’t count. Crunches are usually the easy part, but I lay down on K’s old yoga mat and just…lay there. Feeling heavy. One, two. Three. So heavy. Breakfast happened. Cereal. The only crunching I’ll do today.

Pollo and palabras in Peru

I should work on something more substantive, but the thought runs rancid in my stomach. Okay, let’s start with a blog. But here I am, almost five years into blogging, aware that whether I spend all day or twenty minutes producing a post, it will debut in a mild spasm of links and email notifications, then live maybe six hours before it withers, fossilized under a layer of sandwich instagrams.

Every now and then I get a notification of a comment in an old blog, and feel a spark of joy: those words live! Then I read the comment and find only google translated spam from accounts with names like Acne Scar Removal and Cheap Nike Air Max. 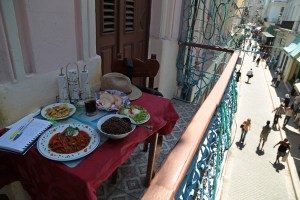 Comida, cafe, and a diary in Havana

(My personal favorite: “Thanks so much and I am taking a look forward to touch you.”)

So when I got a comment last night for a 2012 post about an orphanage in Ecuador, I assumed it was just another spammer. But no! A real human read the post and now wanted to visit Hogar Para Todos. I emailed them the contact info, thinking Now that was a blog worth posting. It got information about something good out to more good people. That is what these e-things are supposed to do.

So that’s one. Then I noticed that one of y’all precious long-time readers had liked nine of my posts in a row. And the best part? The time-stamps showed that she actually read them. And to put frosting on the awesome: she donated to Alvaro’s fund at the end of it. Another blog worth posting…

And I realized one other thing while rereading the blog about the orphanage. It’s…not great. Not awful, but…I’d write it differently today. So? So I’m not taking an MFA program, and haven’t been able to rummage up a writing group around here, but regular blogging does seem to be having an effect on helping me put words together. Given the more substantial project I’m working on, that alone is reason to continue.

And if the blogging itself helps my main project…

But there’s one other important factor: do I enjoy this?

Well. My coffee’s gone, but a vague smile remains. And somehow I don’t feel quite as heavy as I did this morning… I think I’ll keep doing this. And, to help myself and my regular readers, I’m adjusting my posting intentions to every Tuesday and Friday.

And poor tortured Lewis? He never did finish one of those sentences, but when he left a minute ago, there was a certain giddyup in his gait, the ebullience of a man enjoying his life. Maybe this word-stuff isn’t so bad after all, at least, not once you get going.

See you on Friday, when I’ll tell you about the more uplifting rest of the day.

← Ample? Fat? Or something more creative?
Lumps of love, transmitted by wire. →

18 thoughts on “Why bother blogging?”