How many ways do I love thee, Turkish breakfast? Let me count the ways…

Where I ate my breakfast in Fethiye. (And where I slept.) Not too shabby.

I’m pretty sick of this heartbreak crap right now, and you can be honest, you are too. Unfortunately it still colors nearly everything I see and do, so I’m going to take the easy way out. No, not drugs, nothing so prosaic as that. I have this addiction under control. Usually.

I have to start with one of the new loves in my life…one I miss dearly. I miss you yemek! 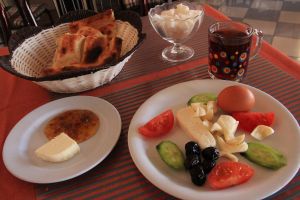 Yemek is Turkish for “food” (looking up the Turkish word for breakfast feels like cheating) and the breakfasts in that land are second only to Portland, Oregon in my mind right now.

Turkey put me on the road of eating twice daily that I am (usually) still on here in Sri Lanka, with 12-hour portions of sliced cucumbers and tomatoes, slippery armies of black and green olives, and enough feta to build a house (or at least an igloo), usually served with about 12 slices of bread.

In Fethiye the olives came from Grandma’s farm. In Istanbul there was thick yogurt with optional ladles of peanut sauce, fruit jam, or molasses. Molasses! I had only ever been slow as, never eating. I took to it as quickly as…molasses (it’s much faster than I was led to believe).

There were more types of cheese in Mardin than I led you to believe.

In addition to the feta, they often had braids of a very firm white cheese, like a salty mozzarella, chopped into pieces. In Antalya they had börek, the cheese-filled fried pastry that is a cousin of the meaty version in Bosnia that gave me food poisoning. (Predictably, I liked the Turkish one better.)

In the Kurdish areas they switched the French bread for pita-like flatbread, which was fine with me. In Diyarbakir they added a slowly colonial pond of honey with hunks of the comb riding around like warships. Alongside the honey was a slice of cheese that was crazy-smooth, and whose taste was sweet and silky beyond my imagination. It took me a minute to realize it was homemade butter.

Everything seems more exotic when you have a mouthful of deliciousness. 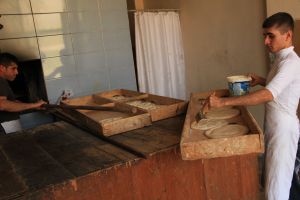 In Hasankeyf I agreed to a tour by the hotel owner’s awkward friend, and before we started we waited, chatting in Arabic, while the baker and his son cooked a round of bread for us in a wood-fired oven. Then we went to what looked like a hardware store, chatted in Kurdish, and bought cheese so fresh it was still warm. I didn’t even know cheese was made warm. Finally we got olives from a little old man, chatting in Turkish, and took them to eat in a spare cafe where flies buzzed in front of windows looking over the ruins of a Roman bridge across the upper Tigris River.

Well shucks, I was going to tell you about Sri Lankan curry, but that will just have to wait.

← If I’d had a clue, I wouldn’t have met the Wigi
I lost my watch yesterday. →

13 thoughts on “How many ways do I love thee, Turkish breakfast? Let me count the ways…”