Shall I deal you in?

Computer problems escalate, so here’s the post I was going to publish my first night in Myanmar, before the street food pushed it aside.

I forgot my anniversary. Over a month ago. But it doesn’t matter, there’s no one else to be hurt by that. “Anniversary” isn’t the right word anyway. Milestone is better. 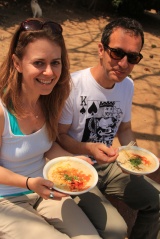 The newlywed couple who showed me around Tel Aviv…locals know the best food!

Israel was my 50th country. Happy Fiftieth to me! Should I have bought a cupcake and put a candle in it? Or maybe in that big bowl of super-delicious fresh-made hummus? (Basically hummus, a little different. But oh lordie, that was one tasty bowl of food.)

Since then Sri Lanka has loved me and I loved her right back, then yesterday I spent the night on a plane, and am now sitting on the suspicious bed of a moldy guesthouse room in a city unlike any other I have ever seen.  My first awareness of Burma came from a movie about Joaquin Phoenix getting thrown in prison there, but now I am experiencing an entirely different and profoundly more interesting Myanmar. (This is natural because now that I look, I find that the movie I’m thinking of happened in Malaysia, and my teenage mind confused it with the cover of another movie. Ha!)

Basically closed to tourism for a long time, and still bearing a bad name (that should be worse if the international media was doing its job properly), this country is starting to get in on the tourism manna stream. Like parts of Sri Lanka, when I walk the street I am clearly not the first westerner they’ve seen, but people do still stop to watch me, particularly the kids, who stare until I smile at them, then giggle and grin back.

I was thinking “I could revisit a country every week for a year.” But what would I do with an entire week in frickin Monaco? (Can I count Monaco as a country?)

Then I thought, “I could make a deck of cards, one country per card.” That is a pretty cool thought. Is that the Queen of Spades or the Queen of Hearts? Think I can shoot the moon?

For that matter, I think Myanmar might have to be the Ace of Spades. Because I’ve never been anywhere quite like this. A bit like Kathmandu, with some extra Guatemala City thrown in…but that’s still not even close.

So here’s to a Deck of Travel. It feels like an awful lot of solitaire lately, but flipping through those cards can make me smile (and talk) for hours.

Shall I deal you in?

← I enjoyed my Sri Lankan chemical burn
The temples of Bagan, whether you’ve slept or not. →