Is that a good start or a bad one? Jungle Birthday Part 2.

I’ll just come out and say it: I was wearing flip flops. Old ones. This may surprise you, given that I was hiking six hours each way to spend the night in the muddy equatorial rainforest of Taman Negara in Malaysia, but I had two reasons. 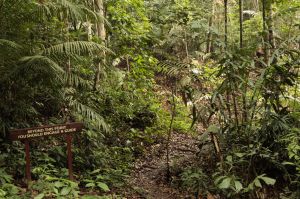 The warning sign when you leave the easy tourist walkways and enter the actual jungle.

First, previous experience with leeches showed that flip flops allow the best access for removal of the little bloodsucking bastards.

Second, they were pretty much my only option after I retired my (somewhat notorious) oversized sandals after they became Grade A Disease Vectors in Myanmar (don’t ask).

They worked well for the first 4 hours on Day One, then their age became apparent, as the anchoring thong in the front popped out with increasing frequency. I bought the things two years ago in Nepal, and they had served me well, but in hindsight, for perhaps too long.

I didn’t mind sticking the little plastic plug back in, it was the fact that doing so meant stopping, which gave a much longer opportunity to the vampirous tube-beasts who were swarming around, doing their little head-waving leech aerobics as they smelled the approach of something tasty.

Have you ever seen them do this? It would be cute if it wasn’t so sinister. They look like tiny hyperactive Ray Charles impersonators…who feed on your blood.

Time to stop and see some pretty stuff on Day One…

Since leeches don’t spread any diseases or do any real harm, my plan had been to just let them do their thing and drop off when they were done. How very Buddhist of me.

Yeah, no. That plan lasted until I saw the first one squirming out from my ankle, where it had attached and bitten through the skin. But the leeches weren’t the worst thing.

This was the world’s oldest rainforest, where intense competition has driven evolution for 130 million years (the area is just slightly above the equator, so even the ice ages didn’t disrupt things). What do you think rules this forest?

Elephants, monkeys, or tigers? Only on the postcards. All of these are reportedly found in the park, but to my eye it was clear who dominates this dense world where a single hectare holds 14,000 plant species, 200 mammals, and 240 types of trees.

A construction worker next to the normal workers

Ants rule this place. Mean ones.

I stopped to take a picture of the first river of tiny black bodies, but by the tenth I was just stepping over the glossy stream. It was when I got careless that I learned more about them. To my disappointment I have been unable to find exactly what the little buggers were (hell, maybe they were termites!) so I’m going to make some shit up that makes sense to me.

There were tiny workers in superhighways a dozen lanes wide and stretching for unbelievably long distances, which I learned when they commandeered a guide rope left to help me climb a steep slope.

Then there were the construction workers, unbelievably larger than the workers. At first I thought these were soldiers, and feared them mightily, but now I suspect their job is to clear fallen leaves and sticks that obstruct the path. They seemed to pace the edge of the stream, and they’re not the soldiers because those, I definitely met.

The soldiers. Assholes! I took off my sandal the first night to find four or five ants stuck to its edges, legs waving furiously. Curious. They were much larger than the workers, but not nearly as big as the construction workers. It took me a minute to figure it out.

They’d bitten my sandal, and they weren’t letting go. I flicked at them. Brushed at them. Still there. I flicked harder and the bodies fell away…but the head stayed put, anchored into my thin sole with insectile tenacity.

So when my sandals would come off anywhere near an ant stream? (And everywhere is near an ant stream.) It hurt. They’re good at getting you right in the tender spot on the bottom of the arch too. You have to lift your foot and rip them off, sometimes coming back for the head.

I wasn’t enjoying this process much as I started walking through the mud. Then I reached a nice clearing by the river. It was pretty…and I definitely hadn’t passed it on the way out.

I backtracked, took another path and came to a wide shallow river…that I also did not cross the first day.

My sandals had given up completely and the thong was coming out every couple steps in the sucking mud, so I had to just take them off and go barefoot. In the jungle. Where billions of members of two particular species were very ready to go right through my skin, and I didn’t know what else.

I backtracked. Bled. Sweated, stepped, and slipped. And bled some more.

Getting lost in the jungle sucks. Especially during the daily Leech Feeding, which is 24 hours long.

The girls and the German were long gone, so I was very much on my own, and sound just doesn’t travel in vegetation that thick anyway.

I tried another path and ended up at the stream again, mirrored by tiny red seeps from my feet. I considered walking out via the water, trusting it would lead to the main river, but if that didn’t work then I’d have a hell of a time finding where to start looking for trails again.

I turned back again and started jogging to give the biters as little chance as possible. Left hand on my shoulder bag, bulky with camera, journal, long pants and raincape thing, my right held the quickly-decaying plastic bag that held the remnants of my food, and my elbow pressed the water bottle pressed against my side.

When I slipped down a slope it gave the leeches a chance to climb all over me, but I think I escaped unscathed. I kept running. I was pouring sweat, feeling incredibly stupid, and lost in the jungle on my birthday.

Is that a good omen or a bad one? Whatever it is, I decided “Screw this, I’m taking the boat.”

I finally found the right path, jogged down it, and half an hour later reached the river at Kuala Trenggan, but instead of a village I found abandoned houses with broken windows. Not stopping to think about what would happen if it was totally deserted and I had to start the six hour trek back, I headed to the water…

Where I found the girls. They were surprised to see me. Literally within a minute or two the boat showed up. If I hadn’t jogged, had gotten lost once more or fallen a few more times, I would have missed it and there was no way to call for another. But I made it.

THAT, I’ll take as a positive omen for the year ahead.

19 thoughts on “Is that a good start or a bad one? Jungle Birthday Part 2.”