Care for a cup of snake-infested tea?

Congestion in my lungs, congestion in my head. I should not be asked to do anything today, nor tomorrow nor the next day. Okay, it’s a man cold, I’m whining, but still. I just want to read and drink tea. 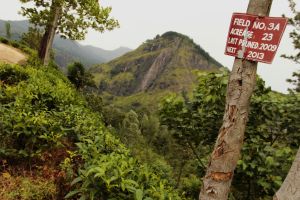 My last trip wandered through two tea producing highlands, the first in Sri Lanka, the second in Malaysia. Both were cool in comparison to the boiling oxygen of the nearby lowlands, but were perfectly suited to a shorts-&-sandals kid from California. Both spanned curving hills with winding lines of tea shrubs like fingerprint whorls, endless vistas of fields, and simple worker housing below large white processing plants. 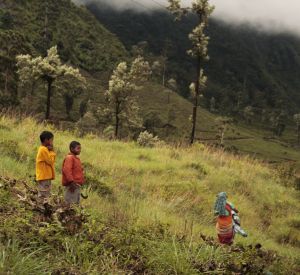 I never saw kids actually harvesting…but that knife is an odd toy.

A single tea bush (apparently) produces 3,000 harvestable leaves annually, which is a lot of work to generate a single pound of tea. (Green and black tea comes from the same plant, just harvested at different stages and processed a little differently.) 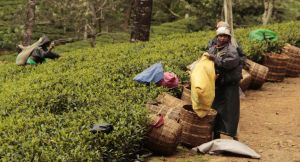 The tea fields of Sri Lanka stood silent and untended for miles, disturbed only by the rambunctious passage of my train, whose insatiable metal arhythmic dance would occasionally disturb or distract a small group of women and children out in the fields, working a job notorious for its poor wages.

The main difference in Malaysia was that I saw only men working the fields. I walked through a few miles of fields on my way to a processing facility, saw men carrying big bags of leaves on rounded shoulders, hooking other bags onto ziplines that carried them down to end in an explosion of leaves at the bottom, and sorting the verdant wreckage in tall piles on the pavement. 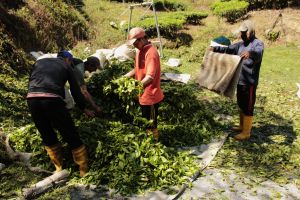 Near the zipline’s end (background), Malaysia

Anyone who was in the Malaysian fields wore thick yellow rain boots, despite the clear blue skies and absence of mud, I suspect as protection again the venomous snakes who infest the fields.

I have no experience with a life like theirs, and a cold seems like a paltry thing to complain about all of a sudden.

My earliest memories include my British grandmother asking if I would like a cup of tea, and there’s one at my left hand right now. I have had a few million cups of it in my life, but never spent a day in the life of a harvester. There’s something wrong there.

Why is it only now that I’m back that I realize I should have done something about that?

← 5 minute walk to reach Bangkok
A new chapter, and feeling good about it →

9 thoughts on “Care for a cup of snake-infested tea?”