Latvia, a second memory of an Ethical Destination

The two men could be twins, though they would have to be of the “long-lost” variety. One of them works in Washington, D.C. with all the other ambassadors, and flies out to San Francisco to accept the award when Latvia earns a spot on The World’s Ten Best Ethical Destinations of 2014 list. He wears a tailored suit, speaks good English with a clipped Baltic accent, and presumably has a fair amount of ink on his tax return.

His brother with the identical jawline wore battered jeans, worked a backbreaking under-the-table tree removal job, and rode a rusty bicycle through the snow with me after our Dutch class in rural Belgium. He spoke only a little English, and didn’t know the name of his country in my language. “I am from Letland” he told me, and I smiled and nodded, embarrassed at my bad geography. I could label a blank map of Europe without trouble, including major cities and places I’d slept, but had no idea where Letland was until he started talking about Riga. 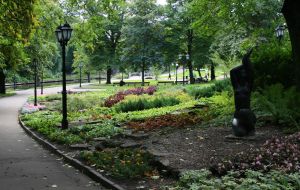 My first night in Riga I was in this park after 11 PM, thinking maybe I shouldn’t be there, then saw women walking alone, felt safer and a little in love with the city

My dominant memory of Riga is rather salacious, best told in another medium, but that’s okay because I like the back-up too. I heard this second story from a brash Scotsman who drank his beer like water in a smoky bar in Wroclaw, Poland.

“You were in Latvia? Riga?” He asked me, finishing the first third of his pint as I answered yes. “Did you stay out of the strip joints?”

At that point in my life I was desperately dull and ruthlessly well-behaved, so strip clubs were off the table and out the door, impossible. “Good call,” said the Scot, “You know they’re all Russian mob, right?” I had heard this actually, it’s not a secret in Riga.

Just above freezing and still the mini-skirts came out, even (especially?) at the Freedom Monument

“I was in one of them up there with a mate a couple months ago. We’re having a pint, and this girl comes up, gorgeous girl, great tits, legs for days, and she starts flirting with him. Asks him to buy her a drink.” I give the wince to acknowledge that I’m aware that would be a bad idea.

“I know, right? But he figures ‘What the hell, just one.’ So he buys this bird a drink, and she’s rubbing his thigh and whatnot, putting ideas in his head, but he’s not that stupid, so when she asks for another he says no and we ask for the tab.”

It’s not tab time in Poland yet, and he signals the barman for another pint.

“So the bill comes, and the girl’s drink costs a hundred euro! He knew it would be more than the menu price, but a hundred? So he says ‘No way I’m bloody paying that!’ and as soon as the words come out of his mouth these two gigantic guys have him pinned up against the wall, and this third bastard, in an expensive suit, real dirtbag, Russian mafia for sure, comes over. He’s smoking a cigarette, right, and he takes a drag and asks my mate ‘You will pay ze bill?’”

A semi-drunk Scotsman does a pretty passable Russian accent.

“How much for Georgia?” A dark era for the US. There were several of these around, some with added Hitler mustaches.

“But my mate’s pissed off now, ‘Fuck you’ he says, and the mafia bloke takes another big pull on his cig, and sssss, puts it out on his arm again, right below the first one. I’m wondering how long this can go on, but after he lights his cigarette for the third time he says, real cold like:

‘I am going to ask you for ze third time. But you should know, ze next one, it goes in your eye. Now. You want to pay ze bill?’”

I was briefly tempted to ask the Latvian ambassador about mafia strip clubs in Riga, but out of respect for his twin brother, biking home next to me with a smile and frozen fingertips, I kept it to myself.

← Memories from one of the Ten Most Ethical Destinations
Sights, sensations, and allegations in Vilnius →

4 thoughts on “Latvia, a second memory of an Ethical Destination”