Sometimes there’s dance in the current.

Tonight is penultimate night’s eve, 48 hours from now I’ll be surrounded by people trying to sleep on a red-eye flight to Mexico City, too bored with the miracle of flight to look out the window. Traveling again…excitement and nerves have been simmering in my stomach for days, warring factions that rise and fall independent of reason, oddly balanced…

So what better way to spend tonight than a travel writing reading. Because that’s not an awkward phrase. The Weekday Wanderlust series has been going for x years in San Francisco, and is a familial den of pleasantries, community, and catiness, a common interest shared among moderately disparate people. My favorites are the groupies. 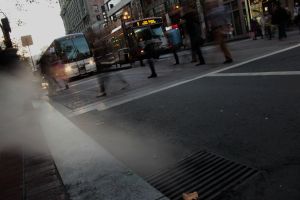 This was my second, more comfortable than my first, and I felt at ease as I stood long-term in line for the single overworked bartender, watching the faux-innocence of the lady who cut in line, and the brazen dickishness of the guy who followed her lead. Chatting with a couple fellow aspirants was a bonus, and I took my place without qualms as a wallflower at the back of the room when the chairs were gone by the time the glacial bartender passed me the glass of overpriced wine*.

(*Maybe he thought I was with the JP Morgan conference, instead of the writers gaggle?)

I enjoyed the readings, particularly the cleanup hitter, and debated trying to mingle when it was done. I felt comfortable, yes; after all, these people have no power to hurt me, there is nothing they can take away when you have nothing to start with. But not so at ease that I wanted to try and mingle.

My new headphones have better quality sound than the last ones, and the song that came on as I walked away was just right to make my legs swing steady, irresistible, so when I reach a red light I turn to find the green. This mood happens sometimes, street surfing, following the currents of the city, accepting whatever road it tells me to follow.

I passed a block west of the station, but that didn’t matter because I had energy to burn off, the euphoria that comes after leaving a tense situation. Maybe I wasn’t as comfortable as I thought? Or maybe it was just the January air, warm as the sigh after a good meal, embracing like the casual presence of an old friend.

Pass two girls, one more obviously attractive than the other, so give my best flirting smile at the “lesser” of the two, a currency she seemed to value. 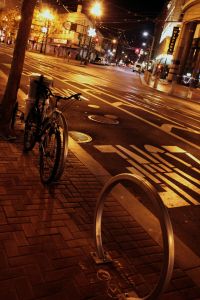 The cute little filly standing outside another hotel with two others is going to notice me. Lift the chin to show her I’m the Emperor of the World, an impersonation both convenient and true, and watch her look back a second later. Give her a smile and a look, see it reflect. But the legs never slow.

There’s something about suits that makes me want to celebrate not having to take myself that seriously. That accounted for the next dance steps. Well, that and The Black Keys.

Then dance was just in the currents of the evening, as I jigged my way across intersections, spotlighted in the headlights of taxis, and bopping past the windows of crowded restaurants.

A security guard slept in a chair, unaware of the performance I put on for him, though the two waiters smoking behind me enjoyed it. My last move brought me around to face the gorgeous woman who had stopped to watch. She gave me a smile like lust, and a laugh like licking, but I’m sorry ma’am, I’m too in love with the night to fall for you. 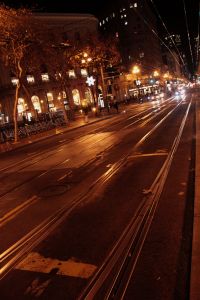 Five months ago I found a $20 bill on the sidewalk on the way home from what was already a good night. That combination meant the money was clearly not for me, and I’ve carried it since, waiting for the person I’m supposed to give it to. But oops, I took it out last week, it was sitting on my desk. So when I passed the saxophone player, filling an urban canyon with Coltrane’s damn catchy My Favorite Things, I could only give him my last $10. I consider the task half-completed.

It’s amazing how sweaty one can get while dancing around San Francisco. When the time was ready, I took my place on the BART platform, determined not to scare anyone. We are modern people, bitter at the indifference of strangers, desperately alone in our bubbles, utterly opposed to anyone who threatens this.

But…damnit..those French guys in C2C are just too catchy, and my cup overfloweth with groove. The sustained gaze of spectators threatened to put a damper on me, but it was an empty threat, and the tomfoolery continued until the train frottaged its way up to the platform. Sexy train.

Once on the train I turned off the music to behave myself. That’s a personality-free environment. Breathe.

At first, I admit, the heads bent over cell phones looked to me as mourners too stupid to realize they were at their own funeral. A dozen victims, overdosed on Candy Crush. Cerebrums corroded by Farmville cyanide. But those thoughts are so wonderfully dark that I couldn’t help but laugh them away. 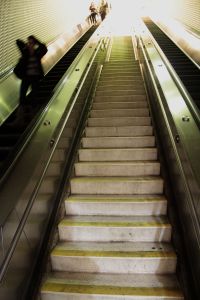 In front of me a gorgeous man conversed with a gorgeous woman in the curt and clear tones of Spain’s Spanish, beloved to my ear. She was explaining BART to him, their stop would be 19th Street, and when she informed him that we were currently under the water of the Bay, he was impressed behind his flawless complexion under perfect hair, she had green eyes above lips too perfect to kiss.

At 12th Street they looked around in confusion, consternation, peering for a sign, half steps towards the door. She gnawed on one of those perfect lips, and I had to intervene on its behalf.

“19th Street is the next stop.” Did you know green can flash like fantasy as it says “Thank you”? It was the perfect opening for conversation, and the palabras swarmed through my brain, but no, I was too shy, too self-conscious to speak to them.

The yang that danced through the streets of San Francisco was satisfied, its yin now in effect, and everything was as it should be.

← Why I travel
Departure Day →

2 thoughts on “Sometimes there’s dance in the current.”