Then there’s no more time to try and remember what I’m forgetting, it’s time to run to the station. If I forgot it, it’s forgotten. No time to pet the cat. Say goodbye to the dogs over a shoulder but make sure to lock the door. The BART train came while I was at the bottom of the outside stairs, and I ran on with 2/5 of a second to spare. Good start?

Why isn’t everyone asking where I’m going? Can’t they see the backpack? I want to tell them all about the charity in Peru, the immanency of the amazing, and the surprise yesterday that I’m going to be “covering” an election in El Salvador. I’m not a journalist, but I play one on TV in real life. From now on I’ll always ask people with luggage where they’re going. 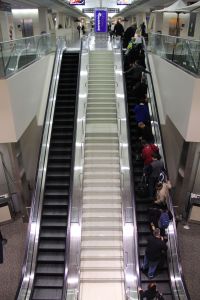 The familiar stops seem quaint, the actors at the end of the play, still in character while they take their bows. It’s okay you guys, you don’t have to pretend it’s just another day, we all know it’s Departure.

Tonight has no space for sleep, an overnight flight from 23:30 to 5:00 that lasts three hours. I’m tired by the time I reach the airport, but elation is better than caffeine. I don’t have the slightest idea where I’ll sleep tomorrow, it’s too far away to worry about. Ah yes, the immediacy of travel, I remember you. You’re the reason I am so bad at planning ahead. I love you.

Vulnerable, clueless, alive. I was number 69 at the taqueria tonight. That’s gotta be a good sign, right?

The movie onboard is a fiasco based on a lack of honesty, it makes no sense anymore. She would have just told him. I should have tried for sleep.

No one bothers me when I stretch out on the floor of a quiet check-in hall in the Mexico City airport, but the cold marble protects me from the sleep I seek. Step outside, chew on the smog to say hello, then wander the airport, a small blot of fat in its bloodstream.

Couches! The waiter has seen this before, and trusts that I’ll order something eventually, so I spend three hours of my layover’s nine curled up on the durable plasticky fabric, just too short for my body, both my long-sleeve garments on, back turned to the inexplicable blast of the air conditioner. I presumably managed a few drowsy interludes, but it felt like a lot of useless thinking.

The food is horrid, and I love the waiter for insisting on a bigger tip. “Only 15%? Maybe more. You sleep all the time…” Sorry my friend, I forgot I’m not in Latin America yet, I’m in Transit. Is 20 enough?

It’s been a long time since I slept, and my elated stimulation is periodically aware that my thoughts made no sense and I can’t remember the last twenty minutes, but that’s okay, the pilot doesn’t need my help to find Lima.

Tourist information tells me what district has the most cheap accommodation, and what’s a fair fare to get there. The older taxista hears my price and waves me to a younger colleague. Lima is beautiful, familiar and new. The air is not the luscious wet rot of the Caribbean, but sufficiently proximal to the Equator that I know I’ve come far again. Airplanes are such a cheat, but I’ll take it. With their help, my inner grin has just spanned 4,500 miles.

Fifth time’s the charm, and the man with the weathered voice and weary eyes says si, they have space in the dorm. I email some loved ones that I’ve arrived. I have loved ones. That’s fantastic.

There is a battered guitar on the slouchy sofa and they’re playing The Doors. Germans talk to Australians in the courtyard over giant beers, and there’s the smell of a plumbing problem nearby, chronologically if not physically. The bunks are spartan and the sheet is clean, my roommate already snoring in his sleeping bag. It’s been forty hours since I slept properly, but I feel wide awake. I lie on my lumpy mattress and smile at the darkness.

← Sometimes there’s dance in the current.
Peru, why you no let me esleep? →