Words didn’t happen in Iceland, but photos did 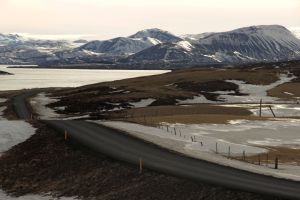 Just going for a drive through the fjords

Iceland, for me, was a vacation from traveling. I had few cultural experiences there (one that threatened projectile vomit), met few Icelanders (guys in a bar explained how to avoid dating one’s cousin in such a finite population), and didn’t even try much in the way of new food (except the reindeer burger, which was de-frickin-licious).

This is just alongside the highway where I stopped to autograph a snowbank.

My normal travel routines and habits didn’t fit in the bag among all those sweaters, and words fell by the wayside. I don’t know where they went, but it’s freaking me out. No, seriously. But if images are really worth a thousand of them, then I’ve got a few million to share.

Stop by a lake, and the wind has pushed sheets of ice onshore. Cuz it’s Iceland, and they do things like that here.

If only I knew where to start. I decided to grab a couple to throw on here…and that was three days ago. How about this one? Why would there not be an abandoned quarry below a fortress mountain? It’s Iceland.

No? Then do you prefer a tourist destination like Gullfoss, the epic (yet strangely difficult to photograph) waterfall on the famous Golden Circle loop?

Note the people on the point, for scale

How can going through these take so damn long? Can I hire an assistant to help? I can pay with…peanut butter and jelly sandwiches?

Or carrots? Anybody want to help me, for carrots? These guys would.

Iceland is full of ponies. Would you be shocked to hear that they eat them? Then I won’t tell you. Maybe I shouldn’t tell you what else there is to eat up there…

← I don’t believe you, but I love you anyway
Hornafjordur. It won’t notice when it kills you. →

16 thoughts on “Words didn’t happen in Iceland, but photos did”