Hornafjordur. It won’t notice when it kills you.

That’s the thing that boggled my mind, as I leaned into the wind, peering at the fuzzy shapes of dunes through the mesh of my cheap hooded shirt pulled across my face, hoping the sweatshop fibers would keep the black volcanic sand from scraping out my retinas.

And I’m not talking about living here nowadays, though that too is impressive, but back in the Xth century. Some Danish king told Bjorkylvörlakvirðerheim Þorlakhöslmangleson (or some such appropriately Vikingish name, I didn’t write it down):

“Hey, why don’t you move out to the eastern edge of that frozen and geologically genocidal island we found in the icy and ill-tempered seas? You’ll love it there. They have sand. And ice. Take your crusty wife and your crusty children too, they’ll thank you for it.”

I’m guessing the king didn’t like Bjorkylvörlakvirðerheim very much.

You can see the settlement replica in the distance.

But he came here. In a frickin boat. Built a homestead, and didn’t die. Incredible. Named Hornafjörður, this area eventually grew into one of the larger settlements of Iceland, though it remained remote, isolated, and caustically severe for centuries. The isolation didn’t start to thaw until the late 1970’s, when the technology necessary to build bridges that could withstand the epic jökulhlaups, or glacial floods, was developed and implemented, completing the ring road around the island.

I shook my head, hearing the percussive scratch of sand whipped against the cloth covering my face, and walked deeper into the black sand dunes, veined with dry grasses as tenacious as any living thing on Earth. I stepped over a jaw bone, bleached white and completely stripped of flesh, the calcium already wearing away at the edges.

This is the sort of place that doesn’t even notice when it kills you.

To my right, white-capped waves off the Norwegian Sea hacked the backs of the waves before them into froth in their haste to assault the shore, outraged at sand’s impertinence in impeding their icily majestic sweep across the sea. Behind me an American-built weather station, nearly abandoned after the nation politely told us to remove out military presence in 2006, hunkered down in olive green desolation, waiting to die.

But in front of me…

Maybe the aggression of the waves had provoked volcanic obstinacy, a geologic temper tantrum, but whatever natural forces pushed up those mountains did so with a ferocious hand. Edges to break axes, ice-lined heights to turn blood to stone and shatter it with a feral grin, and loose rocky screes that could avalanche over a home in seconds to annihilate all trace of the temerity of mortals.

I wanted to stare at it forever. Or at least until the brutal beauty either opened my mind or eroded it. But after a few minutes, fingers growing stiff as the ligaments steadily froze, I got back in the car, which rocked in the blasts of wind.

In the shower later that night, my downwind ear was empty but the side that had faced into the fury was lined with a layer of black volcanic grit that had pierced right through the cloth of my shirt. Cotton? That would last an hour out there. But that place, it will outlast us all. 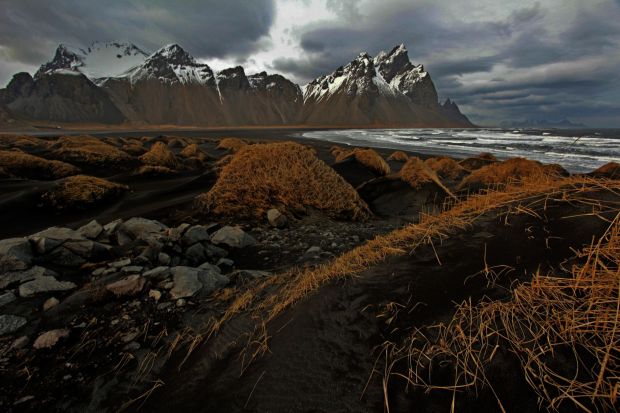 (This place is so brutally beautiful that I’d like to remind y’all that these images are copyright, by me. If you fancy them, let me know, and I’ll share them with you.)

← Words didn’t happen in Iceland, but photos did
Now that’s just far too pretty. This is Jökulsarlon. →

19 thoughts on “Hornafjordur. It won’t notice when it kills you.”