It wasn’t the belly full of savory ropa vieja or the day spent in the sunshine glow of Cuba’s capital city. It wasn’t the colonial facades of buildings, crumbling in Caribbean splendor, nor the classic cars cruising past with heartfelt rumbles. You might think it was the mojitos, but it wasn’t that either. It was almost the notes of jazz, samba, and son that wandered the streets alongside the slapping of sandals.

It was very nearly the air, sultry as only the tropics can be, that lick of breath that knows your body better than you’ve ever dared to look, the perfect medium for the unapologetic sexiness of this island.

It was none of those apart, it was all of them together. And…more. Whatever Cuba is. That’s what it was.

I couldn’t put my finger on Cuba, but Cuba laid its hand on me. It skipped the pleasantries and went straight to caressing my awareness, groping my perceptions and sliding right up along the length of my love of travel.

The first night, the ineffable Jeff Greenwald (who has traveled more than FedEx) was telling me that Cuba reminded him of just how good travel can be. I understood the sentiment exactly.

It was a privilege to meet the people I did in Peru (blogs forthcoming), and El Salvador quickly climbed to the top of my favorite countries. Belgium still tasted like home, and Iceland was so beautiful it was almost crass.

But despite these incomprehensibly blessed winter travels, on the BART train to San Francisco International Airport I found myself…tired. Lacking the exuberancy that normally carries my backpack for me.

Exuberance is great…but it takes a lot of energy. In Havana I found something more…sustainable. It was a languorous love of living, a symptom of a culture not ruled by, addicted to, fear. It was waves and wind that will keep coming in whatever strength they please, and will be welcomed or endured as necessary. It was buildings falling down, but people standing up. It was slow meals with nowhere else to be, and songs that will last until they’re done, not a second less.

Those songs lived in my steps, carried my feet from Prado to paladar to plaza. I gave no instructions, to musicians nor muscles, and let both lead me wherever they willed, my job merely to appreciate, enjoy, love whatever they chose to show me on the streets of a Havana night. 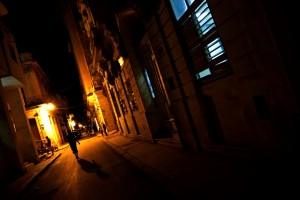 And eventually, the verses finished their succession, and the chorus was done for the night. As the melody trailed off, my legs would carry me back home, muscles warm with satisfaction, almost smug with the steps taken and sights witnessed.

I’d pass the sleepy guard and ascend in the Soviet elevator, humming to myself a song I didn’t quite know, but had quickly learned to love.

← Gods and goddesses
The messenger →