Take the good, take the bad, enjoy the now

The texture of the thing is smooth, and it has a pleasant earthy stink to it before we light it on fire. It’s also surprisingly light; you’d think something with such a known name (and that conceivably could have cost me $10,000) would weigh more. But in the end, a Cuban cigar is just a little rod of leaves.

I’m not a smoker, never was. Maybe it was those years as a runner, and the preposterous notion of putting corrosive cigarette smoke in lungs that I’d worked so hard to improve. But there’s something about a good cigar, right now, seasoned with the elusive vapor of being Cuban and supposedly illicit, that makes it an essential part of the moment.

And it’s a good moment.

The day’s tasks, some completed and some waiting for tomorrow or next week or never, are set aside and dismissed. I’m here. Today my legs pedaled across miles, my lungs filled with clean air and pollen, car exhaust and song. I ate food both tasty and worthwhile, and reached out to an old friend or two who I’d never meant to lose touch with.

The air is that special summer edition of warm, perfect for shorts and sandals, but no sweat unless you choose it. Seems I’ve lost my girlfriend, and finished losing everything with my last one too, but the dog loves me. Sure there are a pair of potentially serious health concerns that won’t be soothed for months yet, but today I feel invincible. Apparently having no verifiable address for five years while you wander the planet is a problem when you come back and apply for an apartment, so I may be homeless in three weeks, but right now I’m going to sit on this porch stoop and enjoy the ending of the day.

The beer is cold. My friend and roommate is smoking the second cigar I brought back, semi-forgotten in the depths of my bag as they waved me through customs. Don’t forget to roll it as you smoke. Don’t draw it into the lungs, just hold it in your mouth like a lyric. And what else goes with Cuban cigars better than Cuban music? So put some of that on. Sounds good, good sounds. 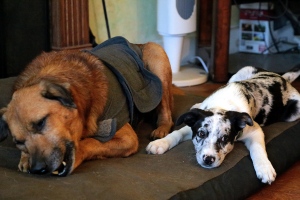 The puppy doesn’t actually live here, and the worries won’t always, either. Take the good and the bad.

Passersby stop to chat. They pet the dogs, who love them for a moment then go back to fetch. This is a neighborhood, a dream we seek. Condensation on the bottles makes my fingertips shine, and the birds seem to sing just for the hell of it.

The worries aren’t solved; it seems that category never really finishes until you die, and right now, in the wrap of sunlight and ease, that’s fine with me. It’ll all work out.

← Now serving number…
At what point does fondling an animal get weird? →

4 thoughts on “Take the good, take the bad, enjoy the now”