It might be racism, but I was pleasantly surprised by the calm rustle of business being conducted in the long room. The extra-tall venetian blinds swayed softly in the air conditioning, while women in the blue-walled cubicles sold plane tickets to Cubans waiting politely in the holding pen. Not the sort of ambiance I’m used to when purchasing tickets.

“How can I help you, Señor?” They even had an info guy! He heard my wish to fly to Santiago de Cuba, issued me a number from one of those red Take A Number machines you see in deli’s, and gestured me to a seat. I looked at the little paper tail in my hand: 22. The red LED display on the wall said 83. I sat down to wait.

The tour group was more fun than I’d expected

An hour earlier, my tour companions had departed for their trips home. New friends one and all, from my quirky roommate to the new neighbors back home, I had meant it every time I said “It was a pleasure to meet you.”

But now I was back on my own, the way I like to be, the way I know how, the way I roll. It felt like firing up the well-tested systems of a space shuttle as I prepared to launch my own trajectory, where to go and how to get there, how to spend my time, and where to eat, no longer able to brush off the touts and restaurant recruiters by saying “I’m with a group, it’s already planned.”

I felt the particular ecstatic nausea that normally comes on the first day of the trip, and got ready to master this island with a blend of uncompromising strength and gentle affection; I was the horse whisperer of travel, a powerhouse of dominant kindness. 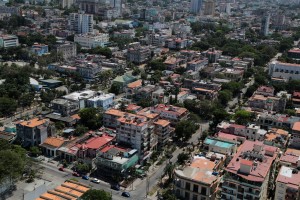 Havana was waiting for me

The first thing I did was go back upstairs and use the toilet with the door open. Dominance!

After one more free meal (with extra potatoes to stock up for the likely food shortages of solo travel) I had come here, to the airline office to buy a domestic flight to the eastern side of the island, and the fabled city of Santiago, less than an hour by plane but at least 14 by unreliable bus.

The number on the wall still said 83.

The chairs were comfy, and immaculate despite being the sort of Chernobyl orange I associate with the 1970s. Maybe 60s? It was Cuba, after all. The chairs formed U-shaped pens opposite each vendor cubicle, and I’d chosen one where a lad with long bleach-and-blondified hair was chatting with the smiling employee. I had thus far noticed a trend both disappointing, familiar, and sadly understandable:

It’s almost certain he’ll make more with an accordion on the tourist street than he would as a surgeon here.

But it seemed different here. Perhaps they earned more than the average wage of a state-regulated (ie non-tourist/tip) job, which worked out to about $20 per month. Maybe happy, but they weren’t in a hurry. I waited just over an hour; where did this guy want to go, anyway?

The number on the wall still said 83.

There was a problem with that. At least three desks had changed their customers, but the number remained static. Oh. It’s like that, is it? The system in place, but irrelevant? Take a number, then ignore it and rush the desk? Fine then, I can do that too.

When Blond Guy finally got up and left, I charged, politely. No longer smiling, the employee looked up at me like I was carrying a rotten dog corpse. “He has just gone to the bank to get his money, he’ll be back.” Gone to the bank? Huh? I sat back down, determined not to fight the foreignness of the thing. We waited. She got progressively icier, staring at her screen with the diligence of someone pretending to work.

The number on the wall still-  No! With a BING it switched! 84! Why?!? No one moved, nothing else changed.

After another 30 minutes of waiting, while a dot matrix printer chittered and screamed somewhere in metallic agony, I had hypothesized that the delays must be due to international travel restrictions. I carefully approached the empty chair, and asked if there was a particular process for domestic flights.

“Any desk can help you!” she snapped at me without turning her head from her screen, and frost formed in my hair.

Just try it. See how nice I stay.

I considered the other holding pens, and saw various demons with spiked axes and fiery whips whose eyes said plainly “Just try to cut in front of me, you little turista. Just try.”

I retook my orange seat. The number on the wall still said 84.

After the second hour had passed, the Ice Queen gave up on Blondie and gestured me forward, her mouth already twisted in distaste. “Good morning, thank you. I would like to fly to Santiago please.” I used every formal and respectful conjugation I could cram into the sentiment.

She was unimpressed as she began tapping her keyboard. “When.”

“Tomorrow maybe? Today if there is a seat.” Our guide had thought it wouldn’t be a problem to get a seat on such short notice, since there were at least four flights per day to Santiago.

“What?!? No! The first seat is….four weeks from now! You should have known this! Then you wouldn’t have wasted so much time!” I got the feeling she was talking about HER time.

Traveling alone, Mr. Adventure, was off to a rough start. But maybe it would get better once I reached….my brain considered the rough map in my head….Santa Clara. Yes. Things will get better when I reach Santa Clara…

← The messenger
Take the good, take the bad, enjoy the now →