A battalion of sauces, lots of boobies, and sheer normalcy on the streets of Caracas.

(In deference to the blogosphere’s reverence for brevity, I split this post in two; the first half is here)

After clearing customs, hearing of youthful harlots, and being warned that the water is shut off at 8:30 PM every night, I was released to wander the streets of Caracas, a city endorsed by voices familial and journalistic as being utterly unsafe. “Walk those streets, and you’ll be kidnapped, shot, or worse” seemed to be the consensus.

My first task was a haircut. That completed (blog to follow), I set my steps to witness the city. I’d left as many expectations and preconceptions as possible at home, and tried to see it with open eyes. What did I see? 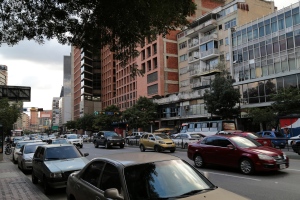 Normal people wearing normal clothes walked normal streets past normal stores selling normal things. Familiar billboards used the same idiotic pressures and messaging to sell junk, and the noise level was generally…normal. People smiled back when I smiled first, nobody seemed angry or in a particular hurry, and no pedestrians were being run over, nor abducted into unmarked SUVs.

All in all, it was a lot like most cities.

There had to be something different, after all, Venezuela is not a routine nation. There was more propaganda and political dialogue than I’m used to, but not so different from, for example, Nicaragua, and less than any country during election season. This, despite the surprising fact that there was indeed a minor election that weekend. 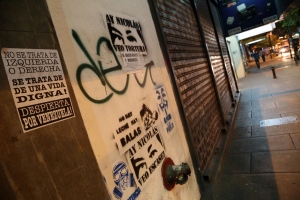 (The tags on this wall read: “It’s not about Left or Right, it’s about human dignity”, “The people are the power”, and the iconic eyes belong to Chavez, painted across the country with lamenting cries to Nicolas Maduro, Venezuela’s president and Chavez’s successor about the things they see, including scarcity, torture, corruption, and violence. But the most striking to me is the one in the middle, which reads “There is no milk, only bullets” and is an infant nursing from the barrel of a handgun.)

The only noteworthy difference I noticed? There was an unnatural incidence of giant boobs. Plastic surgery is insanely popular in Venezuela’s capital, and the cleavage was on patrol.

I meandered through the crowd, took a few pictures, got lost for a while, and surveyed for what I would eat. The answer seemed clear; the answer seemed…normal. 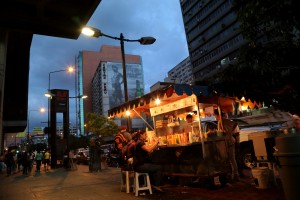 The one where I ate had no stools and more sauces.

Food carts stood at regular intervals on Avenida Francisco de Miranda, one of the city’s main thoroughfares. Depending on the size of the cart, one-to-three cooks sauteed, fried, and assembled portable meals for a steady stream of customers, most of whom stood in front of the cart, helping themselves to liberal quantities from the armada of sauces waiting there. Ketchup, mustard, mayo, barbeque, and ranks of mystery bottles stood ready to dollop, squeeze, and squirt onto sandwiches, burgers, or whatever one had in hand.

A burger just didn’t seem appropriate, so I asked for an enrollado, which was basically a burrito, filled with quality chicken meat, tomato, avocado, alfalfa sprouts, and I don’t know what all else. Some sort of sauce that tasted almost….Chinese? It was good, though I can’t imagine drowning its already drippy depths with surplus sauce.

I went looking for a big bottle of water to wash it down and get me through the dry night, but it was Caracas after all, and all the stores were out, or had only tiny ones. I grabbed two of those from a bored dude in a kiosk, and looked around to decide what direction to go, as the light faded. “The Blue Hour” is a photographer’s favorite, and I wanted to find the right place. Photography time!

Turns out the water shortage wasn’t the only thing to differentiate this city. As the light disappeared, so did 95% of the people on the street. Suddenly there were large open spaces, and a lot of young men looking at me. Taking out the camera didn’t seem like such a great idea anymore.

Hm. Listen to Them, and head in? Listen to my experience that warnings are always overstated? A voice whispered that the most interesting things happen during the “forbidden” times… But another topic of emotional conversation on the cab ride in from the airport had been the utter impunity of criminals in the city. No one was sure what the exact figures were for kidnappings and ransoms, but estimates competed to reach the ceiling.

When in doubt, do as the locals do, which in this case meant abandoning the street. Getting flash kidnapped might make a good story, but would totally ruin the experience for the four other women in the group. 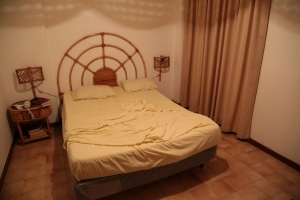 Unremarkable hotel room, clean but for the long black hairs that came preinstalled on the pillows and sheets.

Back in my room, susurrations of the city leaked in through my poorly-fitting window, and a soundtrack for self doubt. Would a balsier traveler, a more audacious writer, have stayed out? Gotten some amazing story that was now slipping by, unseen by my eye? Or would that have just been stupid? Eyelids like sandbags at 8:00, I pondered the question as I went to the bathroom, preparatory to brushing my teeth and going to bed.

All advice considered, if that was the extent of my misfortune… I’d take it. And be ready to witness the next day.

6 thoughts on “A battalion of sauces, lots of boobies, and sheer normalcy on the streets of Caracas.”