I hope I’m not going to disappoint you. 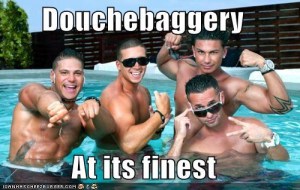 Were you expecting (or fearing) a tale of knuckle-dragging meatheads? Jocks, frat-boys, and assorted male stereotypes who think their egos, biceps, and testicles form a sacred trinity entitling them to treat the world as their personal patriarchal fiefdom?

Cuz that’s not what I found.

I’ll be honest, as usual with humans, I had a script or three that I was prepared to confirm, when I walked into Man Skills class. The most delightfully awful would have been the above douchebaggery, and when the two organizers revealed themselves to be screenworthy specimens of broad shoulders, piercing eyes, and jutting jawlines, it would have been oh-so-easy to scorn them; dislike and dismiss them.

But those bastards had to go and be all…likeable.

And it gets worse. Because not only were they charismatic, but their vision was honest, appealing, and utterly devoid of misogyny. While the concerns and points raised by my lovely lady guest blogger are completely valid, once I heard them speak it was clear the group is consciously and overtly intended to address a need among men, to raise us higher with no corollary of pushing women down.

I’m tempted to expound for pages on masculinity in the modern world. Another day. Suffice to say, people have been railing against the “feminisation” of boys for well over a century, in fact it was this concern that lead to the creation of the Boy Scouts of America in 1910. That generation went on to be the rugged dudes grinding up their own bodies in the trenches of The War to End All Wars; hardly wimps, but hardly complete role models either. (Man Skill #153: Dealing with trench foot?)

When the discussion is driven by Fear, it’s easy to get misogynistic overtones, as people lash out at anything they can convince themselves is an enemy. The founders of the Boy Scouts screamed “Women are feminising our sons!” Instead of the Fear, the Man Skills group seeks to address the Feeling. Instead of “Give us back our testicles, she-devil!” they say “We have grown distant from some aspects of the masculine experience.” There’s a pretty sharp difference there.

It should come as a surprise to precisely no one that many men these days feel removed from their masculine side. But before we ask “How do I get in touch with my masculinity?” we need to ask “What IS masculinity?”

A friend pointed out that women are also capable of all the things listed in the Man Skills curriculum, and she’s absolutely right. Another reader asked “What do you think Woman Skills 101 would be?” The easy timeworn answers are cooking, cleaning, sewing, and child-raising. That might seem horrifically offensive until you acknowledge that those are skills men should have too.

Because nowadays? A man who doesn’t do any of those traditionally “female skills” is likely to be seen as kind of a jerk.

“How was lunch with Tina?”

“It was nice, but oh my god, did you know Brad never helps change their baby?”

But the feeling is that we really don’t know as many of the “manly” skills as our forefathers did. Today if something breaks, we just buy a new one, but we suspect grandpa knew how to fix it. Mine was also the most sheltered generation to date, when parents tried to keep their kids from ever getting hurt, a trend that has gone through the roof since then. Of course Jim isn’t very good with an axe, little Jimmy wasn’t allowed to use a steak knife until he was 18.

Maybe I should have a class for Child Skills that includes climbing trees, scraping knees, and messing with bees. Except that I’d get sued for all three (and think bees should be protected and assisted, not messed with.)

Maybe there is none.

Or maybe there is something else. Some other purpose this group explicitly addresses. Any guesses what it is? Part Two to follow…

[And let me repeat my marvelous guest blogger’s apology for all the heteronormative labels and assumptions throughout these pieces. I wish I was able to more fully embrace the spectrum and variety of the human condition here, but my attempts to do so would be clumsy and wordy. An extension of these ideas to all those facets would be interesting and worthwhile…anybody want to guest blog that one?]

← Guest blog: A Helping Hand
Why hang out with men, anyway? →

13 thoughts on “What men really want.”