Hemoglobin, non-terrorism, and adorable despite a little racism; in Panama City.

I was a happy little red blood cell. Biding my time before entering the veins of Venezuela, I was promenading through the pulse of Panama, crossing arterial roadways to meander beside the lymphatic mud flats of the capital’s southern, maybe eastern, western-ocean-facing harbor. It’s a tidal maelstrom of a place, Panama City. Currents of South America hit the breakwater of Northern dominance, while the West Indies just try to get through to reach the Orient.

And I was just another particle, a nutrient perhaps, life-giving at best, parasitic in the end, and enjoying the ride in the meantime. Franklin Delano Roosevelt surprised me, baptized in pigeon shit, cracked by revolution, and now exiled by urban planners to a scenic and irrelevant perch between oncoming and outgoing traffic.

The statue of “A great friend of Panama” was downtown until it was damaged in a demonstration, so they moved it here.

The floatable tools of tenuous livelihoods were stranded in the muck of low-tide, pretty and hideous, colorful and infinitely drab, appealing to my eye but forbidden to my camera in this post 9/11 world, where armed guards were too bored to acknowledge me, but their supervisor, obliged by rank, called me back from lens distance. “Why are you taking pictures of the harbor?”

“Cuz it’s pretty.” Did not satisfy him. So I pointed out the circles of oil drums against the linear wanderings of boat hulls, the prehistoric muck of the ages patiently reclaiming the trappings of modern conceit, the camaraderie of hulls at rest. 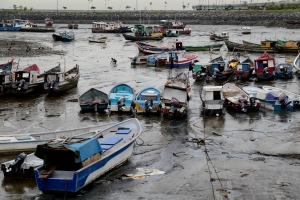 One of Panama City’s harbors, near the Old Town, at low tide

He waved me away. A nearby rastafarian found the show hilarious, and called me over. His skunky smell and laugh-lined eyes made me feel at home, though most of his words were unintelligible. I’m pretty sure we agreed that nowadays people take themselves too seriously. He’s my friend.

It was too early in the trip for loneliness; I was still lubricated by the renewed flow of travel vivacity in my veins, jolly in my joints, melancholy unable to find a place to oxidize. This made it easy to dance with the kids, finding joy for themselves aside from the paternal provisions of playground planners. These kids had too much swing in their steps to need swingsets for their butts.

Playground they ignored, singing instead

“Hello!” They cried like seagulls as I approached. “Hello! Hello!” Then in the precision of classroom lessons transferred to the real world, word by word, they added “Where. Are. You from?” Laughter as punctuation.

I answered, and as politeness decrees, returned the question. “We are Panameños!” replied a big voice from a small body. “Except him” and a tiny finger pointed to the boy in the blue shirt. “He is African.”

My friends on the Panamanian promenade

A glance at the face above the stylish blue collar showed this was not true, was not welcome, was another incidence of the scraping search for understanding of childhood, accidentally abrasive, sharp with the latent racism of Latin America. The boy in blue hid most of his reaction well. It’s probably not the first time.

What do you say? How do you push back, perhaps instruct, be a nutrient and not a parasite? Tiny feet were ready to run off again, my seconds clicking short. “I’m African too” was my best try. This paused their feet. Is the gringo crazy?

“I am African. So are you. We all came from Africa.” I’d neglected to pack my notes on the migration patterns of early humans, but I dare to remember a slight smile on a darker skinned face, and there was no malice in the laughter of any.

They held the pose for 1/32nd of a second

Besides, more important concerns were on hand. Namely, a request for a co-photo so vulnerable, so tender and murmured that it very nearly broke me with its innocence.

Race relations, cultural exchange, personal evolution. Nascent love. We’re all doing the best we can, for ourselves and for each other.

What would you have said, in the face of a child’s unhateful brushes with the legacy of inequality?

← To speak, or not to speak?
Informative, sleepy, exciting. And a little bit disgusting. →

4 thoughts on “Hemoglobin, non-terrorism, and adorable despite a little racism; in Panama City.”