The Khmer side of one of the information signs. The script looks pretty, the content is not

You know how you sometimes find pieces of fabric sticking out of the ground? Oftentimes it’s the remnant of some long-forgotten weed barrier creeping its way slowly back out of the earth. Others it’s a dropped article of clothing, now half-buried in the dirt. In a country like Cambodia, where the trash and detritus of living lie scattered everywhere, you tend not to notice it at all.

So when we were walking around the Killing Fields at Choeung Ek and Mr Vagabond asked if the cloth poking out of the soil could be from a victim, my first response was: “what cloth?” followed shortly by “nah, couldn’t be,” the thought simply too far-fetched to be considered seriously.The next stop on the audio tour had us forgetting it entirely in favor of information that just boggles the mind. Like the fact that an estimated 17 thousand people were killed here. They were brought in from prisons where they had been tortured into confessing to all manner of made up charges. Once they confessed, they were told they were being taken to a new holding place. Instead they were brought here and killed immediately. Though later, when the numbers grew too big and they didn’t have the time to kill them all right away, some were held several days before execution.

The two of us privately thought that perhaps death might come as a relief, after the torture and misery, though? A shot and you’re gone. Until the voice on the tape informed us that bullets were too expensive, so they were bludgeoned to death with shovels, knives, picks, and all manner of unspeakable tools. Oh.

The mind has a hard time truly grasping the horror of something like that.

So you steady your breathing and walk on, listening to the information as best you can, while taking in the cleansing calm beauty of the place as it is now. The breeze gently ruffles green leaves on verdant trees and vines. Outside the enclosure, tidy green fields stretch out in the distance. The air smells fresh and serene, somehow imbued with that essence of who-knows-quite-what that you also find in churches, mosques, and temples. Birds and butterflies flit around exotic flowers and you hope that the souls buried there are resting gently now. Like this has grown up around them as a healing gift from the earth.

For a moment you are able to separate yourself from what you have come here to learn about and feel somewhat hopeful, optimistic, restful. Things will be well with the world, ultimately.

And then there’s this amazing old tree, the type I can be found hugging sometimes when I think nobody’s watching.I kinda instantly fell in love with that tree, feeling immense gratitude towards nature and it. The tree was covered in cloth bracelets to show that other people felt the same way and there was a sign beneath it. The Killing Tree.

The ever-helpful audio tour informed us that the first person to discover the site had found it covered in blood, bits of brain, skull, and hair clinging to it still. And the bodies in the shallow grave by its side? Children. Babies.

I’ll spare you the full details, mostly because I can’t bear to repeat them, but that? That tree? That I was able to grasp. 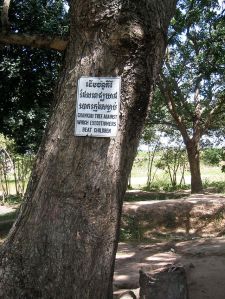 We didn’t feel right taking pictures of the tree, so this is from the Wikipedia page

All I could see was my own precious 4-year-old son. The image of him being beaten there, and worse, came instantly and unbidden. It felt like a physical punch to the gut. How could anyone…? There are no words for that. The horror of the place was now real, very, very real.

Nauseous I turned to sit down and saw the glass box of clothes collected to date behind it, a child’s purple shorts clearly visible on top. I think I actually grunted out loud at that point.

That fabric coming up everywhere? The tour chose that moment to tell us that, yes, it is indeed the victims’ clothing. Between monsoons, time, plants, and whatnot the remains have shifted all around the mass grave areas and come up at will to this day (only some of the graves have been dug up). So, please, be careful not to step on the fabric and bones on the path…

Choeung Ek was a reminder of what people can do to each other. An important reminder, lest we ever think violence is the answer to anything. And Choeung Ek? Not only is it just one among over 20,000 such sites, but it wasn’t even the worst of it. Mr V. and I also visited Tuol Sleng prison later that day, but that one I’ll leave to him.

Right now I’m going to go and be immensely grateful for the life of peace I have been lucky enough to live.

← Travel Questions
Why Cambodia? Why anywhere? →