On the right bus, in Florence

“The Tuscan Frying Pan” had been in fine frying form all week, but at 8:00 AM the air was the sort of warmthy and goldeny and pillowy that makes so many people write books about this place. And what a place. From our hilltop vantage point, Florence spread out before us in its honey mustard tones and terracotta tiles, just another morning in the city that birthed the Renaissance. 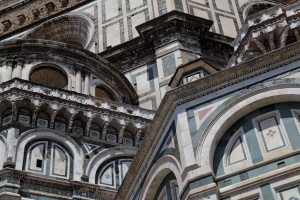 Outside Florence’s Duomo, with its elaborate angles and characteristic coloration.

The clear focal point of the skyline was Brunelleschi’s Dome, and the attached cathedral that gave it a reason. At the end of the 13th century, wealthy Florence had begun that massive cathedral, along the way deciding to cap it with the largest dome on Earth. The only problem was they had no idea how to do that. They could stand in the Roman Pantheon, breathless in wonder and clueless at how it was done. But they began anyway.

After a century or so of rain and snow falling straight onto where the high altar was supposed to go, a cranky goldsmith with no architectural training, having lost the competition to design the baptistry doors across the street, instead solved the problem of the roof. After a thousand years when fear, brutality, and dogmatic religion had choked off intelligence, creativity, and progress, mankind was emerging into the light again, and you can see it when you look at Brunelleschi’s dome, 80 million pounds of brick and mortar reaching 30 stories up into the virginal heavens, built by men equipped with ropes, oxen, and…I dunno…wine. 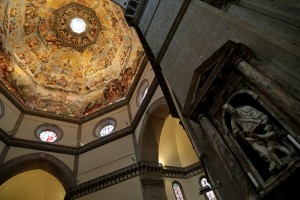 Inside Brunelleschi’s dome is pretty good looking too.

Looking down at the Duomo, I could trace the fashionable Via dei Calzaiuoli down to the cathedral’s secular rival, the tower of the Palazzo Vecchio, where the Medici family ruled, their arrogance and ability (and daughters) taking them from a local clan to a continental powerhouse. I knew that in the shade of the Palazzo was the Loggia dei Lanzi, the public square converted into a statue museum, where Michelangelo’s David originally stood. Glancing over a fraction I could judge where the Accademia sat, the current home of that seminal masterpiece.

And there was the Ponte Vecchio, with all its history and character, Medici Grand Dukes, Mussolini, and modern lovers all leaving their marks on a bridge so beautiful even the Nazi’s didn’t have the heart to blow it up. 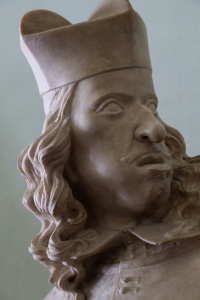 I never said the Medici were pretty.

And next to it, the Uffizi Gallery, where one of our excellent local guides had taken us through the centuries when mankind rediscovered beauty. With context, accessible erudition, and a passionate art-lover’s eye, he’d made me understand why The Birth of Venus is so famous, then did the same with a couple of Da Vinci’s precious few paintings and the only finished panel painting by Michelangelo.

I could see up past the Piazza della Repubblica to the neighborhood where we’d eaten a delicious Florentine meal, from the panzanella tomato and bread salad (made with the special Tuscan salt-less bread) to the savory pasta and luxurious meats that inspire so many raving chapters and satisfied belches. Then around the corner to the bar where we’d discovered that Bohemian Rhapsody goes well with chianti. 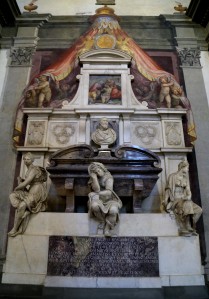 Just standing alone in front of the tomb of arguably the greatest artist in the history of the human species.

My eye had barely made it to the Basilica di Santa Croce, where I’d stood alone and in awe before the tombs of genius, when a flurry of sharp elbows and shoving shoulders barged through. Other populous nations are joining the tourism circuit, and space is growing scarce. But my spirit was full of Florence’s beauty, so I ambled back to our bus, which sat beside the pushy people’s ride. That group? They were on a Paris-to-Rome tour too. But where I’d thought our pace was breakneck, they were doing it in half the time, just seven days.

“Seven days?!?” I asked my mentor, who had spoken with their guide. “How is that possible? What do they get to do?”

“Well, their experience of Florence? This is it. They drove here last night, stopped to take a photo, and now are driving to Rome.”

I could only shake my head and take one more glance at the city where we’d taken a fascinating Renaissance walk, toured one of the best museums in the world, eaten Tuscan food in a quintessentially Florentine restaurant, sampled wine from a hole-in-the-wall down a sidestreet, helped our nervous 18 year old get his Italian haircut, shopped for souvenir paintings in the shadow of the Duomo, then taken a break in a backstreet bakery with the best “Torta della nonna” (Tuscan pine nut cake) I’d ever tasted.

Much to my chagrin, I see now that I was so busy tour guiding that I forgot to take my own shot of the city. But this blogger did a better job than I would have anyway.

← Turns out I like Germany after all, in Munich
Romanticism, revolution, and Riesling, in Bacharach, Germany →

6 thoughts on “On the right bus, in Florence”