“The Tuscan Frying Pan,” Florence was earning its title that day, certified in sweat dripping down the backs and sides of tourists squinting in the Piazza della Signoria, and my hair felt, again, like one of those Russian fur hats. Time for a haircut. And wouldn’t you know it, Florence is the home of my favorite barber. 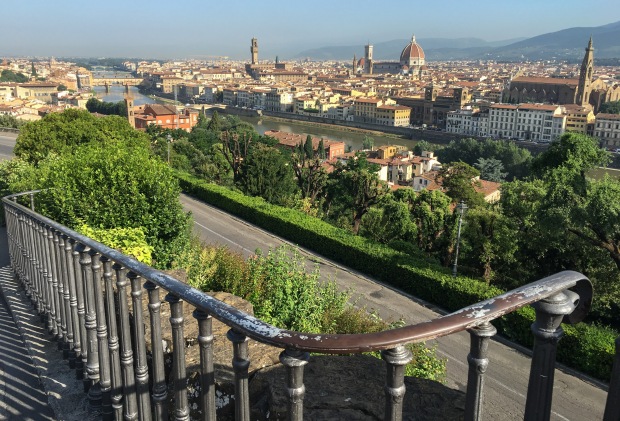 I went straight for the small shop, undistracted by the Basilica di San Lorenzo where one of my favorite Italians holds wishes on his tomb, not stopping at the old friend of a hotel (taken by a different Rick Steves group, the lucky buggers), and swerving around the periodic bulges of visitors whose shoulders relaxed bit by bit with every lick of their slowly melting gelato. Visciola e fragola? Va bene.

Old Town Florence is a tourism city for sure, and the crowds used to irritate me, but working as a guide has helped me see the ways they’re doing it right (improved traffic laws, cleaning the duomo, and coordinating the many marvelous sites) and given me an increased appreciation of the place and its importance in our collective past. So now they’re not the addled brains of people in my way, they’re international minds growing in appreciation and understanding of the birthplace of the Renaissance rebirth.

But yes, at the moment, I wanted them to move. I needed that haircut. Kindly get the inferno out of my way, signore. Before I get Borgia on your ass.

I made it. The slightly cooler confines of a barbieri who’s been cutting hair here since the 1970s and his colleague with a coif like Grace Jones on an ambitious day. They greeted me with their usual dignified and affable buon giorno.

Scissors snipped, buzzer buzzed, and when the razor had scraped the edges clean I felt like a renewed man, renaissance of the scalp. ready to stand on a pedestal if I must, sling in hand, and face the future with concentration and confidence and just a hint of gel.

Back into that Tuscan sun of fame and infamy, punishing and beautiful, try to escape it but don’t forget you traveled here to see it. Down the canyons of Medici streets, past Strozzi home and Brunelleschi dome, a little slower now, a bit more strut, something lyrical in between the paces. Feeling a tad more Italian.

Florence is a pilgrimage, and I wanted to pay homage to the great ones. Architects, poets, and the family of men who led nations, and they’re just the audience for the names we know. Galileo, Ghiberti, Machiavelli, and Dante, men whose deeds echo and dance and scheme and enlighten down through the centuries.

Then over to stand in front of the tomb of perhaps the greatest artist in human history. It was just me, the cooler air, dust motes painted by stained glass light slanting down through basilica space, and the tomb of Michelangelo Buonarotti.

13 thoughts on “Feeling fine and Florentine”