Malaysian freeways are not for bicycles. Nor ox carts.

So I’m riding down the street yesterday, right-hand lane like I’m supposed to, directly over the big puffy-paint bicyclist symbol that reminds cars that bicycles have a right to exist in three dimensions, and this morbidly obese land-yacht of a Caddy behind me starts honking at me. I know, right? Like I’m supposed to fly, or something. Plus, I’m already going as fast as the car in front of me, just call me Greg Lemond, but the peak fuel bugger behind me honks again. I would think it was that old urban legend about the car behind flashing his lights every time the murderer in the back seat rises up, except as fancy as my beautifully battered bicycle is, it ain’t got no backseat. But so I point right down at the symbols as I ride over each one. Bicycle lane, buddy. But no, he keeps tooting at me the whole way home. Toot toot you mother pheasant plucker. Some people.

That’s one dangerously rugged floor you got there, Hong Kong

The only thing I can think is that the individual in question had at least one of four afflictions. One: terrible vision, couldn’t see the signs, in which case they shouldn’t be driving a car anyway. Two: couldn’t see the road over that urban Serengeti of a hood, in which case no one should be driving that car. Three: they’re lazy, stupid, and hate cyclists. Four: just don’t see signs anymore. 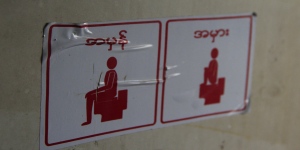 Signs can be informative. If only I knew which one was being proscribed, on a train in Myanmar

That fourth one I can kinda understand. We urbanites, especially in litigious and don’t-expect-people-to-use-their-thinky-parts societies (welcome to the club, Hong Kong), live in a forest of printed instructions, a melee of designations, a clusterfudge of prohibitions, demarcations, and condemnations. If one were to stop and read every sign, they wouldn’t have the literary bandwidth left to read more than tweets. (I may just have solved a mystery that’s been driving me cynically insane.)

But sometimes, one really should read the signs. For example when threatening the corporal well-being of someone who is doing nothing wrong, nor inconveniencing you in any way whatsoever. Or, when the signs are just plain awesome.

Wait, what don’t you want me to do to you, tuktuk driver in Sri Lanka?

← The Wizard of Oz and I
Beautiful Ruins, by Jess Walter →