Do not wail against the flow 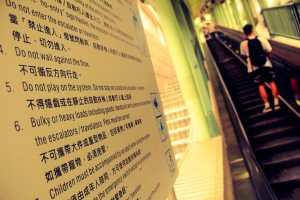 My favorite of all the translated signs. Rule #4: Do Not Wail Against the Flow

I tried to manufacture “poetry” one time by google translating a couple sentences through a few languages and back, hoping for bizarre and accidentally artful articulations. I think I had the best results with English → Chinese → Arabic → Japanese → English, but to my consternation (and nearly admiration) the sentences came out boringly similar to how they started. Or just garbled.

-“To my consternation (and nearly admiration) the sentences came out boringly similar to how they started” comes back “Boring of (close to longing) panic I similar resolution, whether it began how to.”

-“Giant gooey gobs of snot” comes back “Huge nose of viscous tailings.” That one’s pretty good, actually, but still, not quite poetry. (Unless you’re in college. Then anything passes.) 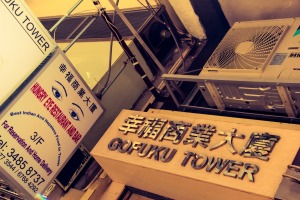 Not sure what would happen if you translated “GoFukU Tower” but Hungry Eyes Restaurant seems like a good idea.

When the sentences came back largely unchanged, maybe just simplified to various degrees of error, it felt ominous. If computers can swap among languages, that’s bad news for language teachers like me. But beyond that, it’s bad news for anyone who values human-to-human contact. Like me. Like you.

But I think the programs are assigning the human utterance a syntactic structure, then just shopping that through. While functional, anyone who speaks more than one language knows the delightful and maddening truth that languages are not code for one another, not even on the syntactic level. There is just too much beautiful nuance in language.

So teachers still have jobs, and as far as generating the sort of accidental wisdom and slippery profundity that one finds, like caches of chuckles, as you roam around the world? That takes real humans, speaking real languages. God bless the semi-fluent. 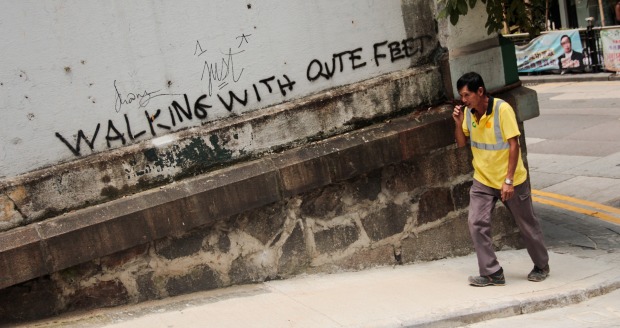 Cute feet? Quiet feet? It’s better than either. Bless humans, whatever it is that drives them to write these things on public walls.

The move towards machines feels inevitable, but I can trust that humans are always going to have a warm, fleshy leg up on the devices, so I can relax in the face of our techno-progression. To say it another way, I will not wail against the flow.

← Beautiful Ruins, by Jess Walter
Has it really been a year? →

6 thoughts on “Do not wail against the flow”