If I don’t clean all this uncooked rice out of my pockets before I do my laundry, will I have clean clothes and a snack when the washer’s done? And rice krispies when the dryer finishes?

Such are the questions one asks after the late night performance of the Rocky Horror Picture Show, and what else should one do on Halloween in San Francisco? What, hand out candy? I think we’re one of those cities with more dogs than children, and from what I hear all the kids get crated off to the mall for trick-or-treating anyway. Kids spending time in a mall, now that’s scary.

For my part, I took my variously costumed self to the Clay Theater with some friends from our rock climbing group. I’m used to seeing them in harnesses and chalk, now I got to see pink wigs, 1920’s throwbacks, and a red crushed velvet pimp suit that stood out in the crowd. Heck, it woulda stood out at a parrot convention.

But in a crowd like that, standing out is every bit as encouraged as blending in. Everything goes, and you can spend the evening in the sort of easy camaraderie with strangers that comes when we all drop our fusty attitudes and remember that no one really cares. About any of the crap we think they care about. Because even if they do? Who cares?

They warn you that there’ll be swearing, sexuality, homosexuality, and people in lingerie, and if you’re going to be offended, get the f*** out now. The three people who pretend to storm out prove the rule, and everyone relaxes in the knowledge that it’s a group of people who came together with the same idea, the same ethos of acceptance, and it feels like freedom. Celebrate with handfuls of rice and the other traditional manifestations, and be raucous in public. 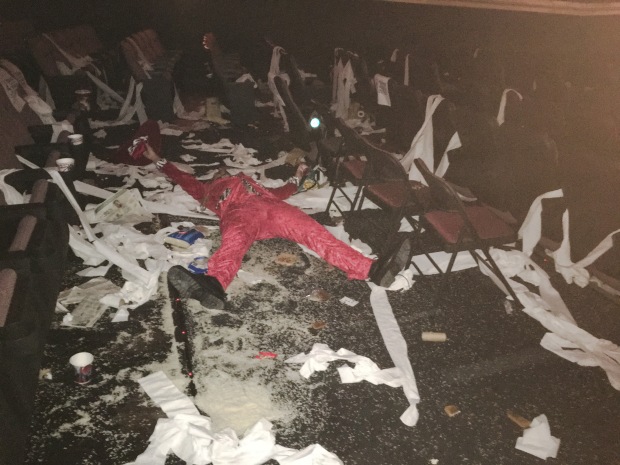 The late night bus back to Oakland formed the “After” version of the earlier BART train’s “Before.” At 7:00 all the costumes were clean, the makeup was precise, and the faces were alert. Sometime after November started, as the bus bumped over the bridge it looked more like a triage center for someone’s tangled imagination. And I sat there, between a dinosaur who lost his head somewhere and Slash with hair in hand, and felt right at home.

Can it be Halloween again soon, please?

← Where should I go?
I think I’ll go call Florida →