So much rain. Beaded on dragon fruit, dripping off those iconic conical caps, and blending in with the wet scales of freshly caught fish waiting in baskets for today’s buyers. Markets are one of my favorite places to people-watch, and Hue was a pristine example of their beauty, stink, and chaos. I barely had to step outside my hotel to find the first of the street food stalls boiling savory soup over wood fires, around the corner to the kinesthesia of a meat market, and across the river to the biggest sprawl of traditional commerce in Hue (pronounced hwe, sorta hway). 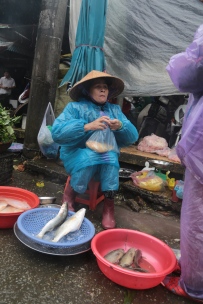 But behind and between those market stalls were the shattered remnants of another city. Hue wasn’t treated as well as Hoi An during the Vietnam War. It’s importance in heavily disputed central Vietnam (just 43 miles from the Demilitarized Zone) ensured that both sides fought obstinately to hold the city. And when the violence of men is involved, the “hold” something is to destroy it.

The centerpiece of Hue is the Imperial City, where the Nguyen Dynasty ruled on the banks of the Perfume River. Massive rampart walls reflected in a moat where flagrant red and orange koi drifted around, waiting for food, a painter, the next dynasty, all of it with equal ichthyal patience.

Outside bustled everyday streets with a little extra dignity, but inside the walls meditated the Imperial Citadel where the business of empire flowed down red lacquer hallways and under the upturned eaves of temples. Ponds dappled with typhoon drops, intricate carvings below ornate balustrades, and dragons guarding the rooftops. And in the center, the Forbidden Purple City, where only the emperor, his concubines, and chosen few were allowed, trespass on penalty of death.

This lady made me lunch, stepping under the old arch to get me tea, smiling wonderfully while I ate

American bombing destroyed most of those buildings. And mass graves from the Massacre of Hue by the occupying then retreating Viet Cong defiled large areas around the rest. The Tet Offensive. “Offensive” is on the right track, for all war.

But those memories have taken their place in the horde, all of it washed by the typhoon drops that fall like years to wash under the feet of Nowadays. And nowadays in Hue are good. Kids playing soccer on fields where troops once massed. Smiling women under remnant archways cooking banh canh and the various dishes perfected by the palates of emperors. And a grinning boy too shy to take a picture but too interested to look away.

The sights of Hue were beautiful. Its food clearly made an impression. But it was the people who made me love Hue the most. Violence comes through, but smiles come back. And Hue is smiling.

← Why you should go to Istanbul
Photopost →

2 thoughts on “Hue welcomes you”