Things got a bit Biblical in Hoi An, Viet Nam

Nobody bombed Hoi An. North Vietnam, South Vietnam, even the Americans in their flying fortresses decided the ancient port city of the Champa Empire with its softly Southeast Asian old town and 16th century Japanese Bridge was not a place for the ugliness of war. (Or maybe they were just focused on Hue. But that can Hue-t.)

After escaping the festive plane I headed for Hoi An, which is kin to Bruges, Rothenburg, and to some extent Venice. Powerful merchant centers, all lost their influence when the tides of trade shifted elsewhere, leaving behind period pieces to be preserved by their neglect. Whoddathunk that forgetting something could make it so easy to remember?

Spared from the abrasive concrete edges and phlegmy pollution of its modernized neighbors, Hoi An is a beautiful place to walk, down streets made elegant by centuries of spice trade flowing from Indonesia up to China, ceramics shipped off to Egypt, and an amalgam of international styles that persist in the city’s impressive tailoring sector.

For long slow hours I walked the quiet ways of Hoi An, past the unintelligible slogans of bicycle vendors selling food to the locals, and the proffered meats and fried treats of those hawking snacks to foreigners. Dark alleyways with Vietnam’s delicious street food where I continued to eat all my meals on low plastic stools, a bowl of soup while kids peered at me and their parents coaxed them to break out a shy “hello.” I enjoyed Hoi An, but my experience was deeply underwritten by one other factor. 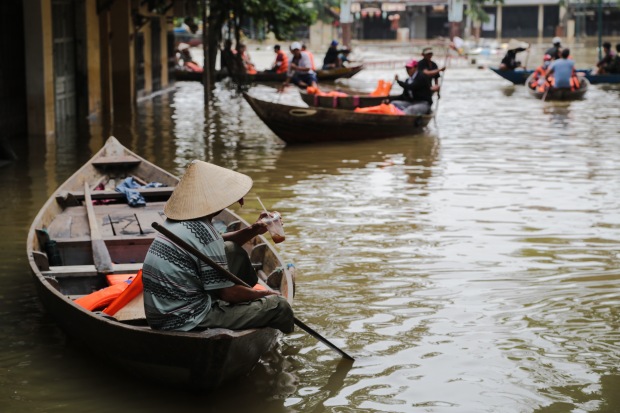 It rained. Nonstop. For days. The Old Town was underwater, streets for blocks around rising liquid to the tops of taxi tires. Flooding blocked off the section of the city the hotel map told me to see, but it didn’t take much effort to enjoy what I could reach. I figured I’d come back another time to see the sights.

Yes, I liked Hoi An. Despite the rain. Then I heard of the city’s fame for ruthlessly overcharging foreigners, its notoriously crummy museums with their inflated ticket prices, and all-around tourist gouging practices run rampant. Huh. 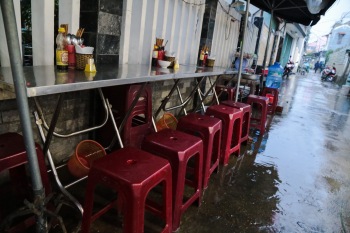 So thank you, typhoon whatever-it-was. With your deluge of assistance I saw a muzzled version of modern Hoi An, most of my fellow foreign friends holed up in their hotels, and the ambition of voracious vendors muted by your constant cool downpour.

Tourism is a hell of a thing to do to a country. And Vietnam’s got it bad. But it’s a veneer, a sideshow distraction of mutual exploitation, and it’s not so hard to get past. Sometimes you just have to walk two minutes away from the tourist hub (Hanoi), and sometimes a mere relentless rainfall can restore an ancient city to its fundamental character.

5 thoughts on “Things got a bit Biblical in Hoi An, Viet Nam”