I made a big mistake. As soon as the hostel owner left me alone in the room with its low sagging semi-rotted plywood roof over the musty bed where someone else’s hairs were clearly visible on the dispirited blanket, I felt I would have been better off to remain at the proper hotel. I wouldn’t have minded the the higher rate of $30 a night. 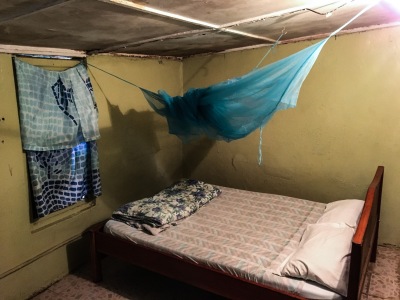 The plan had been a recovery day in the hotel after 24+ hours of air travel time, then move to this hostel for info on backpacking in Kenya from the people who’d been doing it. I despise Trip Adviser and every hostel common room I’d ever seen was a thousand times more reliable. Except this place seemed to be one white guy per room slouched on a sofa looking even saggier than the cushions, staring into his phone in self-absorbed silence and apathy. “Maybe I’m too old for this crap” I considered.

A granola bar and bed sounded good but I knew the right course was the shared dinner in the “garden.” The guy who opened the gate for cars was tending the fire pit, and added a large block of styrofoam to the flames as I sat down with my beans and chapati. I tried not to show that I was no longer breathing. When can I leave?

Except then I was talking to Juan, from Mexico, in Kenya on his way to South Africa, after living in Vietnam, which was a change after China, in turn a shock after the Caribbean. You got the idea long ago, I just love sentences like that. Suddenly I was having a great time. 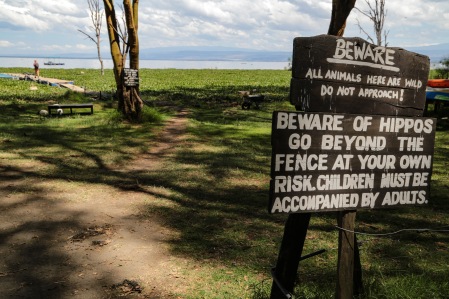 The next morning it was Juan who invited me to the lake. Five of us shared the ride to Lake Naivasha, had lunch at a gorgeous campsight, then rented bicycles at Hell’s Gate National Park.

“I don’t know why it has such a grim name,” said Kazz, a Brit who I liked immediately. “It’s nice enough that the people who made the Lion King came here for their inspiration.” We pedaled past some zebra, whose attendant warthogs glowered at us for a moment before trotting away in a dust cloud of bopping piglet joy we hadn’t noticed.

Hell’s Gate has most of the charismatic macro-fauna but none of the predators that normally confine you to a vehicle. So we biked past the vaguely curious noses of buffalo, giraffes in the distance, antelope grace in the grass, and always the scampering warthogs. Then we arrived at the gorge, found the guide recommended at the campsite, and descended into the shade.

The five us wazungu and Sammy, our guide

Down in the cool and damp we saw the way water can carve out a canyon with incredible speed (people’s scratched names and dates were high up on the walls after a decade or two), saw the emergency exit in case of flash flood just as raindrops started to fall, and swapped between cold water falls and hot springs heat. The local guide was great, my hostel companions were hilarious, the day was perfect.

So yes, I made a mistake, that first moment in the hostel. The mistake was letting a little funk distract me from the opportunity of contact, the gift of friendship, the unpredictable joy of travel. That hostel was exactly where I needed to be.

9 thoughts on “Nairobi and Naivasha”