Fitting in between in Lamu

Lamu is too small to be called a town, but too active (and interesting) to feel like a village. It’s not part of Kenya’s steel-and-concrete economic ambition, but nor does it show the financial lassitude one might associate with other parts of Africa. Minarets are propped above the skyline, but (despite Al Shabaab occasionally operating in the vicinity) the mosques bring a sense of quotidian faith instead of the more violent zeitgeists of extremism playing out in Islam today.

Out on the edges of Africa and the Middle East, settled somewhere between tourist destination and local secret, Lamu exists in the calm zone of the in-between. And I loved it immediately.

A small stretch of shoreside promenade is big enough for the couple cars in town, but everything else is pathways just large enough for two people to pass each other. When my local guide gestured at one narrow alley and called it “our main street” my first response was to chuckle politely at his joke. I realized just in time. With their arm-span width and the way they curve gently and jounce from block to block, it reminded me of the smallest nooks of Venice. Though the inhabitants are very different…

In the narrower alleys I would stand aside for the local women in their hijabs, chadars, or niqabs, but that was mostly courtesy. The ones who rather demanded the space were the most famous residents of Lamu: donkeys.

You’d see them everywhere, loaded up with building materials, supporting children, tolerating adults, or just standing in the sun like smelly sages, gurus who have learned something from centuries of Indian Ocean breezes but know you’ll never understand. That’s not to say they’re flatline creatures, as proven by the time a boisterous pack of adolescent asses came boiling over a hilltop and avalanched down at me with impressive speed. I had enough time to start my mental recorder in case I was about to witness my own death, but they parted around me, barely, passing within inches on either side like a goofy version of a bullfight. 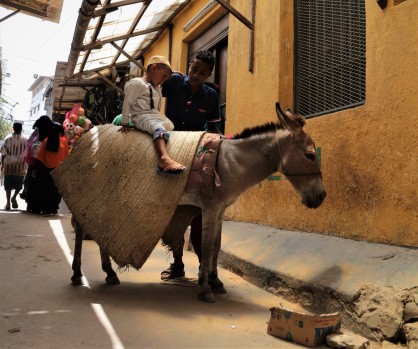 Lamu’s food was a blend of Swahili spices, Indian subcontinental sauces, and African substance, all bowing before the reality of living in an isolated settlement with access to the sea. The fish had eyes. So did the eels. And if you wanted a break, there was always goat in the stew pot.

Three nights per place is my habit, +/-1 if there’s more/less to do, but Lamu had a pretty short list of activities. If it was on a tour, it would probably be one full day. So how long should I stay?

I already loved Kenya but felt no adrenaline urgency to see more right away. The vestiges of my Mombasa food poisoning lingered, but one of my favorite moments of each day was the sheet of newspaper filled with fried things my neighbors would share for a few shillings. I was still too restless to go home, but fully unpacking my bag felt luxurious and correct. It seemed I was in a moment of my own in-between, on the fringe of my travel habits and health, and Lamu was just the right place to be. I stayed a week.

The view from my hostel’s roof terrace

← Cranky grandpas and the next election scandal
Thank you California →

4 thoughts on “Fitting in between in Lamu”