March 25, 2011
Some mornings the staggering Beauty of the World leaks into the familiar environs of our apartment and provides a startling beginning to the day, complete with ill-advised attempts to photograph it.  (I have been so busy with school and work that my poor camera is getting all dusty, though taking it out still feels familiar and savory.) 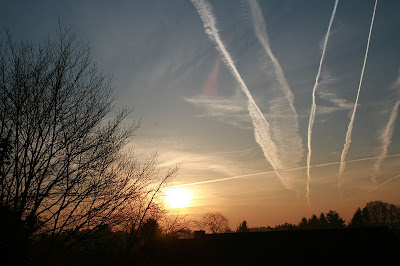 Anyway, I opened our kickass Euro-window-shutter things to take a picture and had just enough time to look at it and be disappointed before I sneezed.  Then again.  Two more.  Today’s revelation: I have allergies in Belgium.
In California my allergies were kinda hit or miss, some years yes, some not so much.  The year I spent backpacking throughout Europe and Northern Africa I had nary a sneeze (I have a theory for that) and last year it hit me in Northern Spain, especially when I was working on that religious cult’s farm (remember those blogs?) planting corn, green beans, and giant gooey gobs of snot in every row.
Apparently Belgium is a sneeze-positive country.  Frickin great.  Not to sound too germaphobic, but when someone sneezes in the confined space of the train, I get annoyed and want to confine them to the weird little door-vestibule area.  Now the sneezer is me, and I barely resist the urge to stand up and explain in every language at my disposal (including enthusiastic sign language) that it is only allergies, not actual germs.
The really amazing thing though has been how suddenly and textbook accurately Spring arrived.  March 19 was cold windy winter, March 20 less cold, and boom! March 21st, frickin gorgeous.  Sunshine and light breezes.  Cherry blossoms.  Flowers in the bushes, sexual tension in the masses, and pollen in the nose
Not long ago it was too cold to smell anything in the mornings, so I wasn’t sure if it was just my imagination that that second block smells like foot-cheese about half the time, and now I still can’t tell through the face-faucet that I now bear.  Time to learn the Dutch words for allergies, medication, and snot-rag.