I just quit my job.

March 22, 2011
I was hired at a “medical research” company for a particular project to last 6-8 weeks.  Last week was #10, and we finished the main part, with an additional 2 weeks to do the second phase.
After that?  I heard we are all going to get laid off.  No, I heard there are a few short projects for some people.  No, I heard there is work for English-speakers year round this year.  No, I heard they are going to make us into cat food.
Whatever.  In the last 10 steps to work on Wednesday the notion of finishing the project then quitting had just concreted in my mind like a massive belch relieving a churning stomach.  I was going to wave my hand to disperse the air and walk away.
The first phase was calling doctors and CEOs, who are notoriously challenging and whose secretaries in the US are frequently difficult/dreadful/bulldogs.  The second phase was calling business owners, and the expectation was that it would be a piece of cake.  They were collectively a piece of something alright, but it ain’t cake, ya dig?
These people were disgusting.  Truly just jerks.  When did it become acceptable behaviour to hang up on people?  Do their mothers know they behave this way?  I don’t want to go on and on about it…but seriously…fuck these people.  (Speaking of mothers, sorry Ma, I know you hate it when I swear, but sometimes it’s warranted, you know?)
It is a rare thing for me that I feel the desire to do harm unto others, either verbally or by flying over there to smack some manners into these ass-mongers, but I found myself wanting to call them back, not to magnanimously remind them that this was uncivilized behaviour, but to tell them off.  And that just ain’t me.
I sat at my desk and felt a weight on my chest, sickly constriction, bone-bending disgust.  I could barely muster the energy to call another one.  And when I did, it was another craptastic wheelbarrow-full of chumpholery.  Repeat.
Everyone feels down sometimes at work and I had slogged through a bunch of those low points before, but it was suddenly more than I was willing to bear.  (Actually it was a graph of an exponential equation.  The x-axis is time, and the y-axis is soul-drainage.  It was already an upward slope, but all of a sudden that shit took off.)

So maybe I am a wimp who couldn’t stick it out.  Couldn’t finish what he started.
Or maybe I am courageous enough to leave something once it passes a threshold of suckiness, despite the inner obligation-voices telling me I should stay, obey the comfort of a reliable paycheck, don’t hope for more.
I have too much love for my beautiful soul to mistreat it like that.
When I look at the blank faces of rush hour commuters, their road rage as they go to and from jobs they don’t love or even like, or I hear the universal small-talk of hating one’s job, it feels like disappointment.
Disappointment that this is all life is.
This disappointment doesn’t occur on playgrounds.  Or at junior high school dances.  Or at graduation ceremonies as valedictorians spout clichés about finishing one chapter and beginning another, or lighting candles to light the future, or any of that shit.
When does that enthusiasm and optimism die?  Is it inevitable?  Is it as universal as I feared, sitting on a train full of people who didn’t even think about interacting with each other? 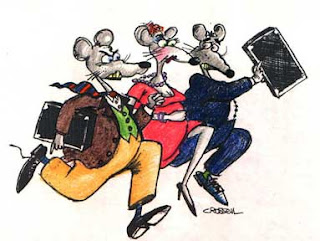 Back at the job, I will miss are the people.  I won’t be there for the last week, as everyone winds down together, and says goodbye with awareness and pacing.  I said goodbye as I was walking out the door, basically.  Literally in several cases.  There are some people I didn’t even say goodbye to.
But tomorrow I will go to class, run an errand, then fucking go home.  Make dinner for K.  Go to the gym.  Go to bed relaxed.  Not annoy anyone.  Read.  Did I mention actually SEE my girlfriend?  Have a conversation with her that doesn’t consist of “hello, how was work, good, me too, good night.”
After quitting, I came home and starting making a surprise dinner for K.  I stood in the bathroom window, pinning the cutting board against the windowsill so I could watch for her to get home, so I could call her as she was coming up the stairs and ask “what do you want to have for dinner…together?  Surprise!” as she was opening the door.  But it turns out, not wanting to spend another night here alone, she had gone to her parent’s house to have dinner there.
While inconvenient for my attempts at a surprise, that really underlined that I made the right choice.  I have no idea if I will be able to find anything better or if I will regret walking out of the giant fart-container that was the call center, but come on home, babe, I’m here again.