Average thoughts in an unaverage (that’s a word now) land.

They don’t know what they’re doing, and neither do I. We get along just fine.

I almost wish a photo could include smell…almost.

There are three hotel options for backpackers. I have spent the last three nights in a tile cell I could span with my arms where the odor of sewage gradually increased as the monsoon rains steadily overwhelmed the sewer system. This morning I could taste it in the back of my throat when I woke up. “Yes, I’ll be checking out today.”

The window looks out through a moldy screen into a three-inch gap before the brick wall of the building next door, no light penetrates that canyon with a garbage bottom, and my room number is A. Next to me is 2. Upstairs are 101, 102, 103, and a similar-sized space marked C.

I’m pretty sure I’m sleeping in the storage closet.

Embarrassingly enough, I’ll have to look up which one this was. So beautiful…and so many.

The second option is the Nylon Hotel, because that’s not a weird name or anything. Am I the only one who sees that and thinks of it as The Pantyhose Hotel? Do they have an hourly rate? I was going to move over there anyway until I went by last night and encountered the single rudest staff member I’ve ever interacted with. Luckily I’d recently eaten ice cream, or I might have punched that sucka right in his betel-nut stained teeth. Ice cream: the great pacifier.

(Note: Mandalay is insanely ripe for someone who knows how to run a backpacker hostel. The current places do not understand hospitality, or comprehend just how much backpackers love to recommend places to each other. The first place with kindness, a smile, and decent prices is going to put these other schmoes out of business real quick.)

A block down is the ET Hotel, where I planned to move today so that I could catch the boat to Bagan tomorrow.

Except I don’t know what I’m doing. 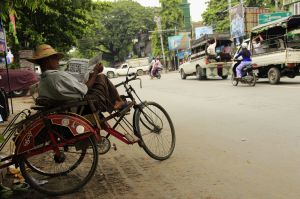 Making one of the bicycle-with-sidecar “trishaws” look mighty comfortable.

I looked at the boat…13-15 hours. And the bus…8 hours. I love the idea of taking the boat from Mandalay…but I’m not sure there’s enough romance there to merit those seven extra hours of looking at a muddy river, even with golden stupas loitering above the jungle canopy. An Irishman who struck me as especially well-informed said he’s heard it takes 10 t0 48 hours and you’re sitting in a plastic lawn chair.

So the bus to Bagan! Except I still don’t know what I’m doing.

Because there’s a good chance I have no money. Well, I have money. I have a veritable militia of Andrew Jacksons and Alexander Hamiltons with me, but Myanmar only accepts US dollars that are perfectly crisp and clean. No folds. No ink. No creases, blemishes, or signs of being real money. So there is no way to know if my dead presidents will have any influence here. My first two tries this morning were rejected. Sorry Andrews.

Add to this the contrary rumors of whether or not banks and ATMs in Myanmar accept foreign cards, and there is a decent chance I could be broke at any given moment.

But it doesn’t encourage extended wandering, so I guess I’m doing the tourist loop. That means the temple-ridden hills of beautiful Bagan and then the notorious sanctuary and tranquility of Inle Lake before heading back to Yangon. Going to Inle first saves me about five hours on the bus.

Five hours isn’t that long…until it’s extending 11 hours to 16. On a bus. In Myanmar.

← I love this place…unless it kills me.
An unexpected chance to get killed in Mandalay →

10 thoughts on “Average thoughts in an unaverage (that’s a word now) land.”