The street dogs were humping outside the five star boutique hotel in Cuzco. I’d run out the door of my own funky hostel without brushing my teeth, but luckily the numerous (and bored) staff seemed not sure what to make of a grungy gringo, and perhaps swayed by my prodigious use of the formal Spanish verb forms, agreed to let me use their fancypants bathroom while Abi waited for the Argentinians across the street.

Abi would be my guide for the next four days while we drove, bicycled, walked, and occasionally soared on our way to Machu Picchu; the three Argentinian girls would be my primary companions. They seemed terribly young, and so very…..what…..Argentinian? It seemed unlikely I would develop a traveler-crush on any of them, and I wondered for a moment what it was about them that faintly repulsed me.

Just enough space remained in the familiar white minivan of tourism, and we squeezed in among the Brazilians. They were young and male, wrapped in new alpaca sweaters and a precise lazyness. Plenty of hair gel. They reminded me of a futbol team. The eight of them bantered in Portuguese with the closed ease of a well-established clique, and I wondered if it was going to be a lonely four days.

They spoke Spanish while hitting on the Argentinas, so I had hope for better conversations to come, but I sat back within myself as we climbed through Andean towns where Inca heritage squinted in sun-leather faces, choclo grew in precise rows, and piglets followed sows through the overgrown shoulders of the new highway.

The Argentinas stepped aside for cigarettes at the bathroom break (is there anything less attractive than smoking a cigarette?) releasing most of the monkey tension from the Brasileiros, so it was time to test their cliqueishness. “So, you guys are all Brazilians?” I asked in Spanish. Feeble, but it’s a seed. 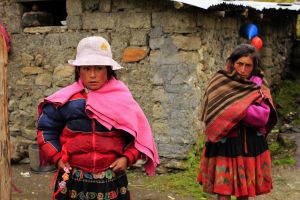 “Si” one replied, and they went back to Portuguese. Lonely days it is. I tried once more when we stopped to change a tire, with an identical lack of success, so wandered off to take a picture. I had just enough time to reach the nearby house and request a photo of this little girl before the van roared up beside me, Argentine pop spilling out the windows and Abi shouting “Hey! Boludo! Vamonos!”

My co-passengers might not be ideal, but Abi was clearly a force of nature, and I had Peru to keep me company. Cuzco has something special, but as we moved away from the city the houses were painted with the dignity of space, while the Andes casually asserted their divine presence through the foggy windows. Happy backpacker.

We had just passed Abra Malaga, a pass among the clouds at 4316 meters (14,160 ft) above sea level, when the Brazilian buzz escalated. Below us, figures bicycled down the winding road that marked the edge of a sheer cliff like eyeliner.

Then it was me moving through mist, effortless acceleration as the dubious equipment bowed to gravity, wishing for lower gears while I tasted rain through a grin that wouldn’t stop for miles. My favorite moment was coming around a blind corner to find myself face-to-grill with a semi truck. There’s no friggin way they’d let you do this in the US, poor lawyer-ridden bastards that we are. I don’t think I even signed a waiver.

Dinner that night was chicken, rice, and French fries, with conversation and a growing awareness of who these people I’d inaccurately snap-judged in Cuzco actually were. The food was good, but the conversations were better.

I went to sleep that night as rain pounded on the roof, thinking this trek might be pretty good after all. And the best was yet to come…

4 thoughts on “(Mis)judgments in the Andes”