The chaos had subsided, a few more empty water bottles in the gutter, a few cigarette butts still smoking at the feet of silhouettes standing in the unreliable lamp light.

Communication breakdown, transportation failure, this is the time when a traveler might get angry. I’ve been there, and learned that I am most fluent in Spanish when pissed off. Or maybe I just don’t care about the subjunctive when stranded in sketchy situations.

But standing there in my stinking shoes and rancid socks, I was okay with it. The delay would have a price that had nothing to do with the wait, but I had so much gratitude in me, I could pay that too. I’d just sit back and watch the movie of the preceding three days…

The morning after the bike ride, we had breakfast made by Abi’s mother, coca tea for anyone who wants it. At 7:00 our feet were stepping over mud puddles from the night’s deluge as we started the 21 kilometer walk to Santa Teresa. 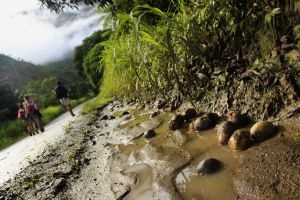 Not these particular mangoes, but close by

Just out of town we passed Old Santa Maria, the town that was evacuated after the El Niño storms of 1998 brought the river over its banks. We harvested mangoes from a tree alongside the path, the bark damp beneath my fingers as I tossed the fruit down to Abi, the only female guide I saw during the four days, and a powerful presence on the trail, reliable for good humor, information, safety, and friendship. I normally don’t mention companies, but I can happily give five stars to Travel Fast Cuzco. 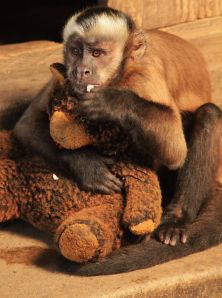 We took a break in a family’s sideyard, just outside the kitchen where a dozen guinea pigs waited their turn to become dinner. We met the notorious Jairo, the pet monkey who is famous for stealing things from pockets, smashing cameras, and…shall we say…enthusiastically embracing the attributes of buxom backpacker girls.

At the highest point of the trail, Abi told us a little more about Inca theology, and guided us through a small offering ceremony, honoring the sacred mountain in the distance with the traditional trio of coca leaves to symbolize the three realms of life.

Crossing a recent mudslide, I had the queasy sensation of looking down to find that the sludge was moving again…underneath me, and towards the rushing river near at hand. Vamonos! We swam in a side river, feeling again the liquid tug towards the torrent close by, then hiked past coffee plants, coca plantations, pineapple, papaya, and guanabana trees.

Sore feet and easy laughter, we sat on the edge of a cliff, waiting our turns to cross above the turbulent Urubamba River in the small metal basket they euphemistically call a cable car. The whole system is powered by people pulling ropes, and I took my turn. I was concentrating on the rapid process when Abi approached me, breath ready in powerful lungs.

“Hey, Señor Tim! What happened, did you crap your pants?” Sitting in the mud while I waited had given my posterior a nice brown tint, and the poor souls crossing the chasm had to wait awhile in the middle while we stopped laughing. Ah poo humor, what ever would we do without you? 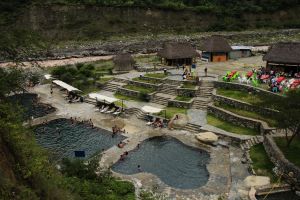 The nine hour walk ended at a natural hot spring, because life can indeed be that good. Blisters on pinky toes went quiet, soreness ebbed from calves, and friendships expanded between tour groups in a web anchored in Santa Teresa but spanning the globe. Two Austrians joined us there, and it was immediately apparent that they were Grade A blokes, the kind you want to climb a mountain with. But first: drink, dance, and be careful with your ahuacatls….

← Soothing scraping on a Peruvian morning
From balls to buckets. Inca Jungle Trip (Part 3 of 3) →