Soothing scraping on a Peruvian morning

The party people from Lima were still sleeping it off, or maybe they had just gone to bed, so I was alone at breakfast in San Bartolo, on the coast of Peru. A steady stream of staff brought bags of fresh produce to the kitchen from the market across the street, and a 16 year old delivered two propane tanks on the back of his 125 cc Honda motorbike, improvised straps tenuous on the dented tanks.

I couldn’t hear for sure, but I think the music in the kitchen was Wyclef and/or Beyonce.

A trill on a little wood pan pipe announced the arrival of the sinewy man with a wheeled contraption, a cross between a unicycle and a wheelbarrow. He paused, and when two cooks came out of the kitchen with large knives in their hands, he flipped the thing over and quickly set up shop. 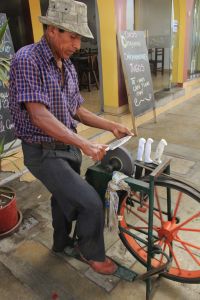 A pump on the foot pedal set the main wheel turning, a leather strap scraped the road crap off then connected it to the smaller wheel. Taking the first knife, he eyed the edge, tested it with a thumb, then set to sharpening it on the spinning grindstone, the sound of scraping metal oddly soothing in the morning air.

I wanted to know this man. To take his picture. It was Day 2 of the trip though, so my nerves were still a bit shaky. “How do you sharpen knives in the US?” He might ask me.

“There’s either a sharpener in the knife block, we do it ourselves (usually poorly) or we just kinda…you know…buy a new one?” I didn’t want to admit that. And what if he thought I was a jackass tourist? What if I was?

But there’s no space for missed opportunities anymore, so before I could talk myself out of it, I grabbed my bag and approached him. I used the absence of mosquitoes as smalltalk, saying I wanted to move here. Tangential compliments are always a good way to go, no? 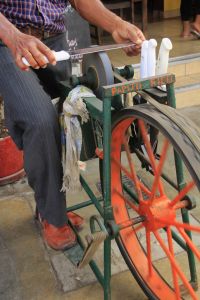 With careful use of formal verb forms, I asked if I could take a picture. He was not an emotive man, but in his minimalism I sensed that the idea was not brand new to him, but still unfamiliar, and utterly incomprehensible. “Que raros, los turistas, no?”

He focused on his task while I snapped a couple quick shots, his leg, which must be harder than the steel he sharpens, never slowing as it pumped the foot pedal that earns him a living. We talked a little while he finished, and once his hands were free, I handed him a few soles, which he accepted with a slight nod.

He went on his way, and I returned to my table, where my breakfast was waiting, a dry bread roll with a thin slice of cheese. The radio was playing Rihanna, you can stand under my umbrella.

9 thoughts on “Soothing scraping on a Peruvian morning”