Would you like to go to the Ecuadorian Amazon…someday? 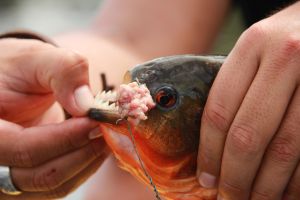 I remember the water. Everyone describes it as “dark as tea” but that’s the exactly right, water more saturated with tannins than your morning Earl Gray, so your swimming limbs disappear in an amber fade. And warm on top, where the equatorial sun saturates the top couple inches, then increasingly cold as it sinks to unknown depths filled with unknown jungle. Some of the denizens are well known however, and I remember wondering if it was a great idea to be swimming in the same opaque water as anacondas, caimans, and piranha.

But what are you going to do in the Amazon, NOT swim? (Besides, it was the candiru, a fish with a legendary love of lodging itself irremovably in one’s urethra, that really concerned me. Also known as the toothpick or vampire fish.)

I also remember the spiders. Lurking constructs of legs, fangs, and eyes that our guide was able to produce from the brush next to your hip whenever he felt like it. The scorpion spider’s claws, the diver spider that goes into the water to catch and kill fish, and tarantulas galore.

I remember the dignity of the Siona people when we visited one of their villages. The calm presence of the shaman who shared a bowl of fermented yucca chicha made with someone’s saliva, then performed a cleansing ritual for us, where he lightly whipped K’s back with stinging nettles, then a little harder when she refused to admit that it hurt. I remember his smile, her smile, and my blend of concern, admiration, and traveler joy.

I remember the pygmy marmoset that ran out of the bushes and up the side of my leg to perch on my shoulder for awhile.

I remember pink dolphins surfacing in front of a sunset that looked like Pachamama had kept the best colors for this place.

Five days in Cuyabeno Wildlife Reserve, and it was among the most memorable places I’ve been. As amazing as it was, I get the feeling that it was juuust a little bit Amazon Light compared to Yasuni National Park, the other lobe of Ecuador’s protected Amazon territory.

Yasuni…is on my list. I would love to see what is arguably the most biologically diverse place on Earth, and just know that I’m in the same jungle as two uncontacted native tribes, the Tagaeri and the Taromenane. And I suspect so would many of you. Hopefully we will have that chance someday…but there is a problem. A dirty, tragic, and disgustingly familiar problem.

Oil. There’s a lot of it under Ecuador’s  Amazonian region, the Oriente, which includes both Cuyabeno and Yasuni.

Actually. I’m going to leave it up to you. What happened there is a crime that people need to know about, and the oil company (Chevron bought Texaco in 2001) needs to be held accountable, as repeated legal decisions have agreed.

Rainforest Action Network has a short summary of the story here. It won’t take you long to read.

Afterwards, or if you are already feeling a bit too intimidated by the environmental ills of our day and choose to skip it, you can go to Amazon Watch’s page and sign a petition to Ecuador’s president asking him not to destroy this invaluable piece of our planet.

Petitions may not do much, maybe nothing, but can you spare a few seconds to click?

And if you want to do more? Amazon Watch and Altruvistas have a remarkable trip there next month…one week left to sign up. I know it’s last minute, but maybe you’re the one person who will read this and make it happen, not waiting to see if “someday” arrives or not.

Or if you need more than a week’s notice to decide to cross the planet, maybe see about next year, next time, somehow, somewhere…someday.

← Should I go to Venezuela?
Good night, Lucy →

11 thoughts on “Would you like to go to the Ecuadorian Amazon…someday?”