You might think you packed light until you’re in the back seat of a van, the kind that coaches used to take seven high schoolers to track meets in the 80’s but now holds you and 14 other adults in 100% humidity, and you need to haul yourself and your bag around and over the packed benches of steadily sweating bodies to punch from the still air of the stifling van out into the swirling chaos of a Mombasa street. Out there, 4 degrees south of the equator in the dry season, the sun is clinging and insistent but thankfully the air is moving, along with everything else. Tuktuks careen around corners, pedestrians sway slightly in the Swahili breeze, and the buzzing motorbikes show you’ve landed solidly in the middle of the hive. 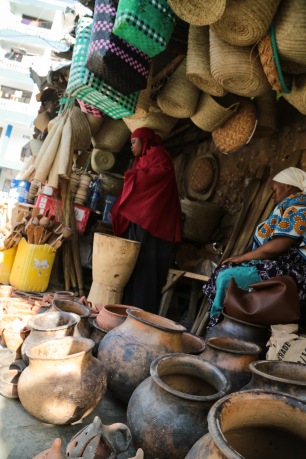 The kinetic chaos of the street was balanced by a serene calm from the neighborhood’s whitewashed buildings with their cerulean blue trim. Was this the influence of the Portuguese, who joined with the Ottomans, English, Somali, and Omani kingdoms to cut the history of violence that gave this place the nickname “The Island of War”?

Nowadays Mombasa is known as much safer than Nairobi, and while the bigger city didn’t feel dangerous either, Mombasa felt like the kind of place you can walk in peace with a camera in your hand all day long. So I did that.

The tripadvisor list-topping Fort Jesus was fine but I found more Mombasa in the streets. Everywhere was a market, women selling clay pots, woven baskets, holders for oil that I recognized as part of a Hindu morning puja. Fishmongers had the day’s catch filleted and displayed, workers sewed garments under the minaret that sounded the Call to Prayer, and everywhere children were being children, same as they do in your town. I bought sandals from a man with eyes like the Dalai Lama and a young Masai guy later admired them as we fumblingly created a new handshake.

But the main impression Mombasa gave me was the same as I took from Kenya as a whole. Friendliness. Walking those streets I felt a thick sense of sheer affability approaching camaraderie. It was the kind of absolute welcome, generously and quickly given, that humbles the traveler and warms the humanity. In Mombasa (as in most of Kenya) I wouldn’t walk more than a couple minutes before somebody would say something to me, I would answer (maybe with a few words of my fumbling Swahili) and within moments I would feel like I’d made another friend.

← Nairobi to Begin
There’s something about trains →