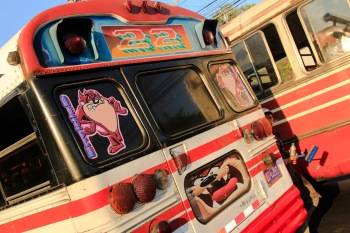 A guy was selling toilet paper by the roll. Doing a steady business, too. Smoke from grilling tortillas was heavy in the air, even in the thick greasy exhaust of buses barely managing to keep their combustion internal, and I watched a succession of men honk their horns in childlike rage, then completely ignore it when someone behind them did the same.

From here, I love that Nicaraguan bus yard with a traveler’s affection. But at the time, my initial eagerness deflated by five days of wondering what I was doing wrong, a case of First Destination Syndrome caused by stowaway expectations that had evaded my defenses, I was just kind of moving through it. No longer hoping for adventure, I’d be happy to arrive in one piece.

When my bus came it was packed with hot human meat, my thighs now sweating worse than any of it. And when I climbed out on the side of the highway and the waiting taxi wanted too much to take me over the hill, I bargained him down to half the distance for a quarter the price, annoyed at having to do so.

I think I may have been a bit grumpy as I started walking down into the volcanic crater of Laguna de Apoyo.

But glimpses of too-blue water between the boisterous trees were little shots of joy that entered through my eyes to slide down my spine and lighten my feet. And it felt like bliss when I finally dove off the dock into the old cold of water that doesn’t remember being anywhere else. (Apoyo is an endorheic basin, meaning it has no outflow, just evaporation, and given that it’s about 23,000 years old, I’d imagine some of those molecules sliding around swimming feet have been there awhile.)

Then came delicious food. And solar embraces while I read a good book. The moon at night, monkeys in the morning, and butterflies all day long. The FDS of Leon had been cured. Or replaced? Updated.

Small things lift your mood like cosmic elevators, as gratitude shows itself to be the most powerful force on Earth. Street food starts tasting like authenticity, and you can increasingly differentiate between the hucksters and the genuine. Lower expectations have cleared away your barricades, and positive draws positive, calm creating kind.

Maybe you sing. Dance easier. Smile whenever, and frown almost never. The furrowed brow of affluent discontent doesn’t fit in your bag anymore. The world is as it is, and you’re blessed to get to see it. Prepackaged postcard notions from advertising minds and peer pressure polishing can best be used as toilet paper. You’re not in their idea, you’re in your reality, and you know what? It’s better out here. 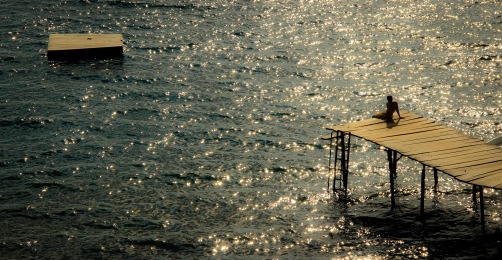 Sitting on the dock of a volcanic crater

The smell of rot under the bushes, a song you’ve never heard before, street dogs dying in alleys, and the mingling senses of possibility and vulnerability. You’re just where you are, as it is, and as you feel.

And it’s everything you could have wanted.